What a glorious week it has been. The weather has been on top form & we have taken full advantage. The garden has kept us very busy over the last 4 days but we managed to find a little time here & there to relax in our beautiful surroundings.

A couple of nights ago we took the hound for a walk to the cave in Laide which was pretty impressive as the sun was setting & the waves were crashing in. It wasn’t a particularly windy day but some of the waves were pretty big.

Today we were up a tiny bit earlier than normal …… 4.45am!!!! for the Laide Wood Dawn Chorus Walk. The sunrise was a beauty and it was nice & mild for so early in the morning.

There was plenty of birdsong happening in the wood with Chaffinch & Wren competing for the most heard. Redpolls were whizzing over the tree tops on a regular basis. The next sighting wasn’t of the bird kind but still interesting if you’re into mammal droppings!!!!! The resident Pine Marten had left a little present on the path!!!!!

We heard a Mistle Thrush singing away in the distance and managed to spot him (or her) on top of a very tall Pine Tree. We saw the nest site of a Woodpecker & later spotted it flying quite low sounding a little alarm call. Then as we were nearing the car park we heard the high pitched trill of a Goldcrest and also a new sound to us which was the drumming of a Snipes tail feathers during display flight, it was something pretty unusual. And to finish with we heard a Skylark in the distance singing away. So all in all it was a very productive trip with lots going on and we must say thank you to the very knowledgeable Peter Cunningham who has quite an ear for birdsong.

Next on the agenda was a walk along Gruinard Beach with the hound. At 8.30am we had it to ourselves, the tide was on it’s way in but we had enough time to edge around the rocky outcrops

The hound thoroughly enjoyed playing on the beach with his tennis ball.

Further along the beach we came across a couple of Oystercatchers, one was enjoying a good scratch  but the other wasn’t too pleased with us being around!! 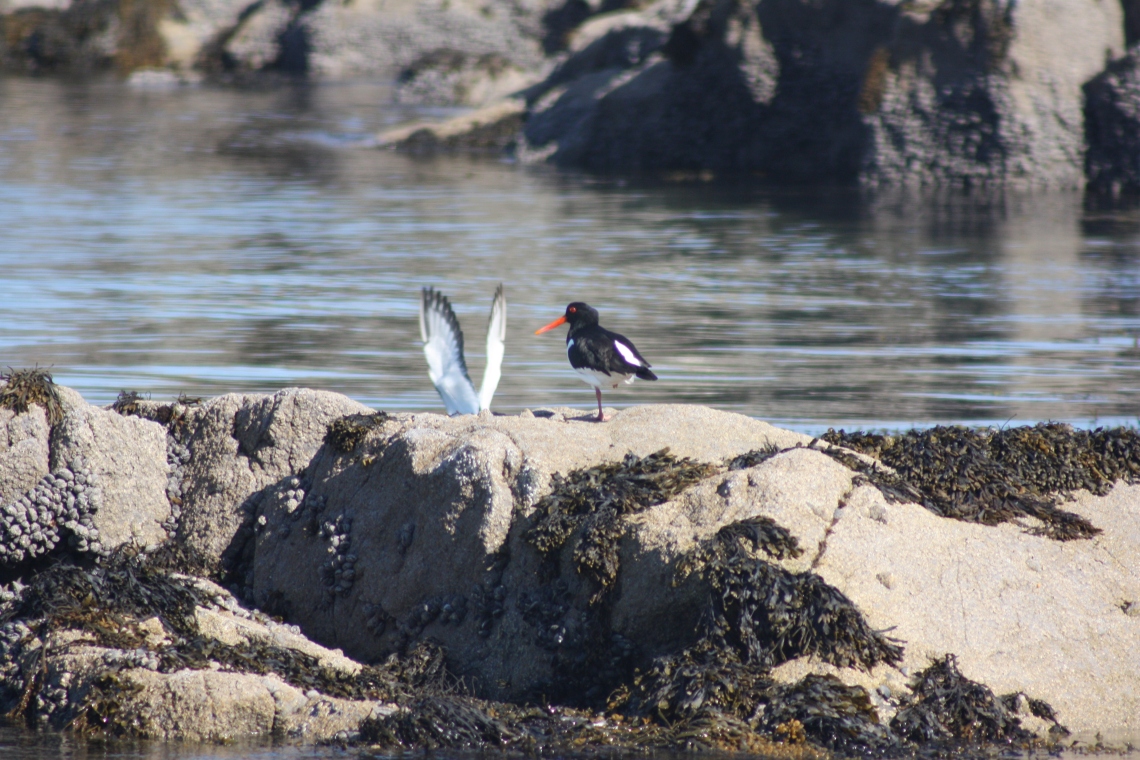 Then it was time to visit Gruinard house. They had a Garden Open day today for members of the public to walk around & admire their beautiful gardens  & vegetable plots. The house is located in a picturesque setting with Gruinard Bay & Gruinard Island in front of the house & the gardens overlooking the riverside. They had a book sale & a tea & cake afternoon with a share of the proceeds going to Gairloch Heritage Museum.

Well we have been up now for around 19 hours so it’s definitely time for bed!