The Flowerdale area of Gairloch is a picturesque wooded area with waterfalls, wild flowers, hills & lochs. Named by the Mackenzies of Gairloch for the abundance of wildflowers found. The glen benefits from it’s own micro climate due to being fairly sheltered from strong winds.

There are several easy way marked walks throughout. The Waterfall walk, the Cherry Hill walk and the Woodland walk. There is also the Old road which up until 1846 was the main route into Gairloch from the south. In Gaelic it was known as ‘Dubh-ghlac’ which means ‘Dark Hollow’. A couple of days ago we opted to do a section of the old road, part of the waterfall walk and a little detour to Loch Airigh a’Phuill.

We started off following the old road which is a particularly pleasant walk through woodland, there was an abundance of bird life flitting between the many different tree species and we thought we caught a glimpse of a pine marten but it had dived under the fallen trees before we managed to even lift the camera.

The views of the mountains that peeped through the trees looked pretty impressive with their little dusting of snow however the cattle in the field alongside the track forgot to tell us that their friends were further down the lane roaming free & waiting to greet us!! With Charlie being part of our party we declined the invitation to tea with the hairy coo’s and turned back toward Flowerdale. Had we have gone further the old road takes you past Kerrysdale and along to Loch Bad an Sgalaig which we will no doubt complete another time without the hound. 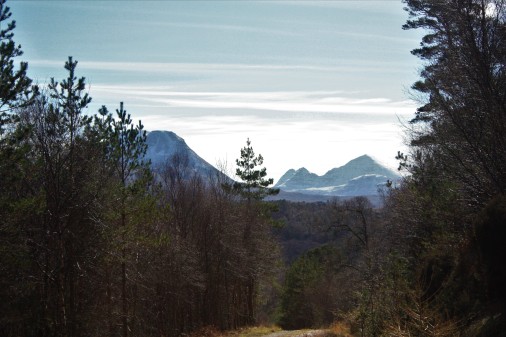 As we headed back along the track it was time for a lunch spot and what a spot it was…….

Slioch and Beinn Eighe basking in the sunshine, within a day or two the snow had completely disappeared from the hilltops.

We stumbled across a collapsed dwelling amid lots of trees, we’re not sure whether it was just a sheep pen or a home but unfortunately it was completely caved in.

Next we took the path for the waterfall walk where there is a monument dedicated to Iain Dall MacKay (the blind piper of Gairloch), born 1656, died 1754. He was a renowned poet, piper & composer in early Highland piping history and his chanter, which is the oldest Highland bagpipe chanter known to exist, is now at home in the National Piping Museum in Glasgow. 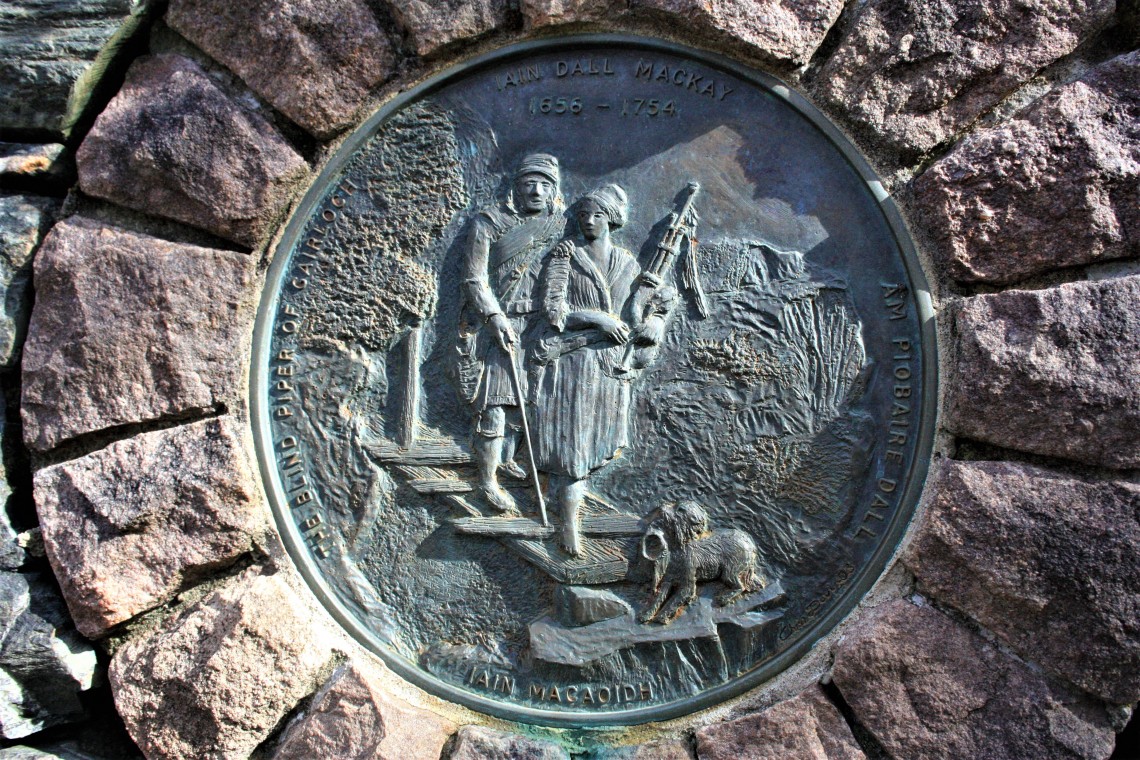 Following the track through the mixed woodland it opens up to reveal a fantastic view of Loch Gairloch and the Isle of Skye in the distance.

Next was the detour away from the main track heading towards Loch Airigh a’Phuill. There is a worn track through the moorland with way markers which are easy to follow but waterproof boots are needed even on a beautiful sunny day!  There are a couple of trig points which can be easily reached and give far reaching views over Gairloch

You would have thought having walked for 5 hours and needing a little assistance on the steeper sections of An Groban that a certain someone would be tiring a little but no, the barking usually means ‘hurry up!’

Just one of several great walks around Flowerdale. We’ll be back another time to explore a different route.