If you want to escape into the wilderness then this is the walk for you. Carnmore nestles between the great Fisherfield Forest and the Letterewe Forest and is sandwiched between two substantial lochs, Loch Maree and Fionn Loch.

Carnmore the hill overlooks Fionn Loch and on the banks of the loch is a lodge & bothy named after it, the properties belong to the letterewe estate.

The walk starting from Poolewe is a very straightforward albeit long track which gives access to ‘The Great Wilderness’ and several Corbett’s and Munro’s in the area. We started the walk at 9.30am with the hope of walking to the lodge, bothy & back within daylight hours.

For the first section of the walk we followed the path that run’s alongside Loch Kernsary. This path forms part of the popular 8.5km circular walk that initially follows the banks of Loch Kernsary before heading back to Poolewe having reached the old white farmhouse at the end of Kernsary.

The path that leads to Loch Kernsary has views of what’s in store with the far reaching hills in the distance. In particular Beinn Airigh Charr is the most prominent of the hills hiding the likes of Slioch which are further along the banks of Loch Maree. 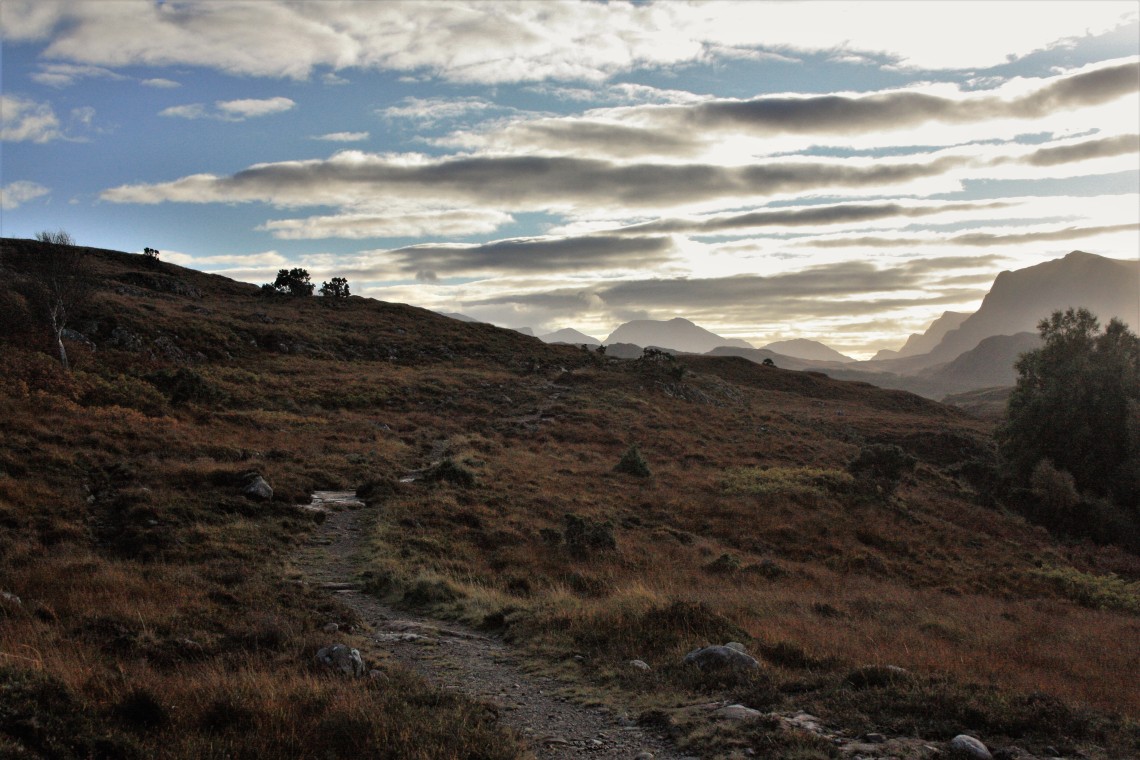 Whilst only a very small Loch, Kernsary which is only a 20 minute or so walk away from Poolewe, does have a certain charm to it. It does give a taster of what’s to come & you do start to get a feeling that you are heading towards a remote location as you move further away from civilisation.

Below is the view looking back along Loch Kernsary towards Poolewe 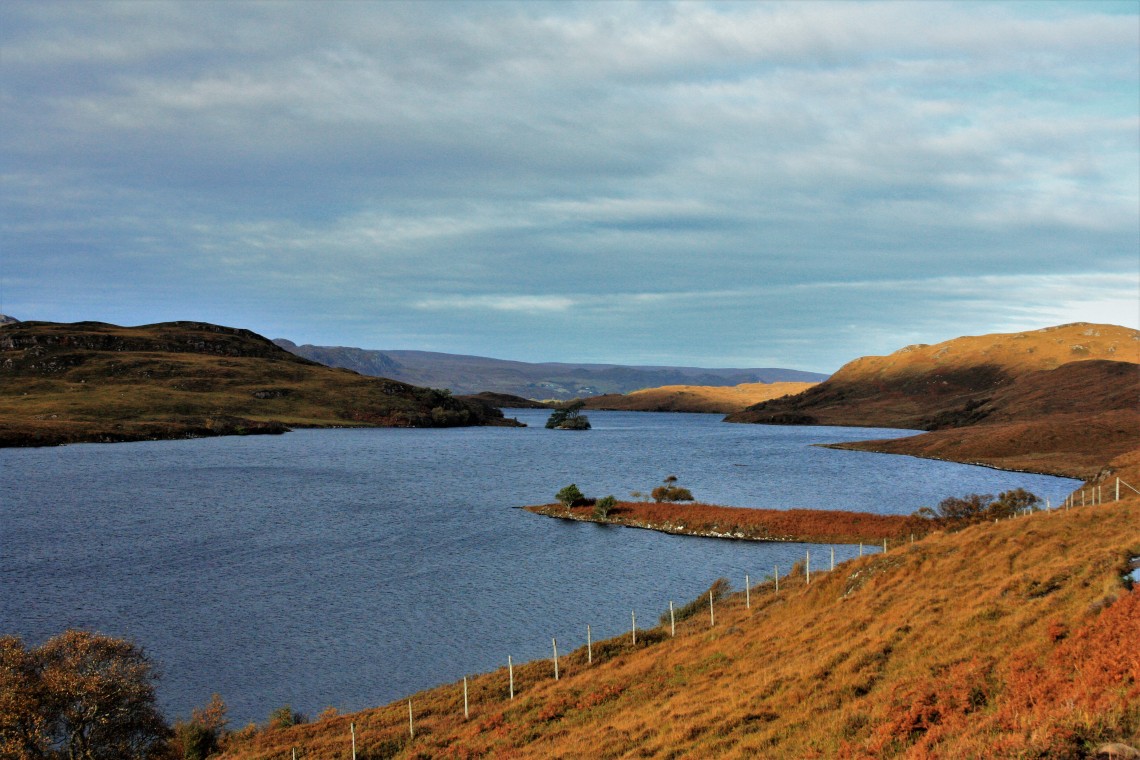 Towards the end of Loch Kernsary there are the remnants of an old croft house,  it looks as though more recently its been used purely for storage. It certainly holds a majestic location albeit it might have been tricky to get from A to B given its remote site. 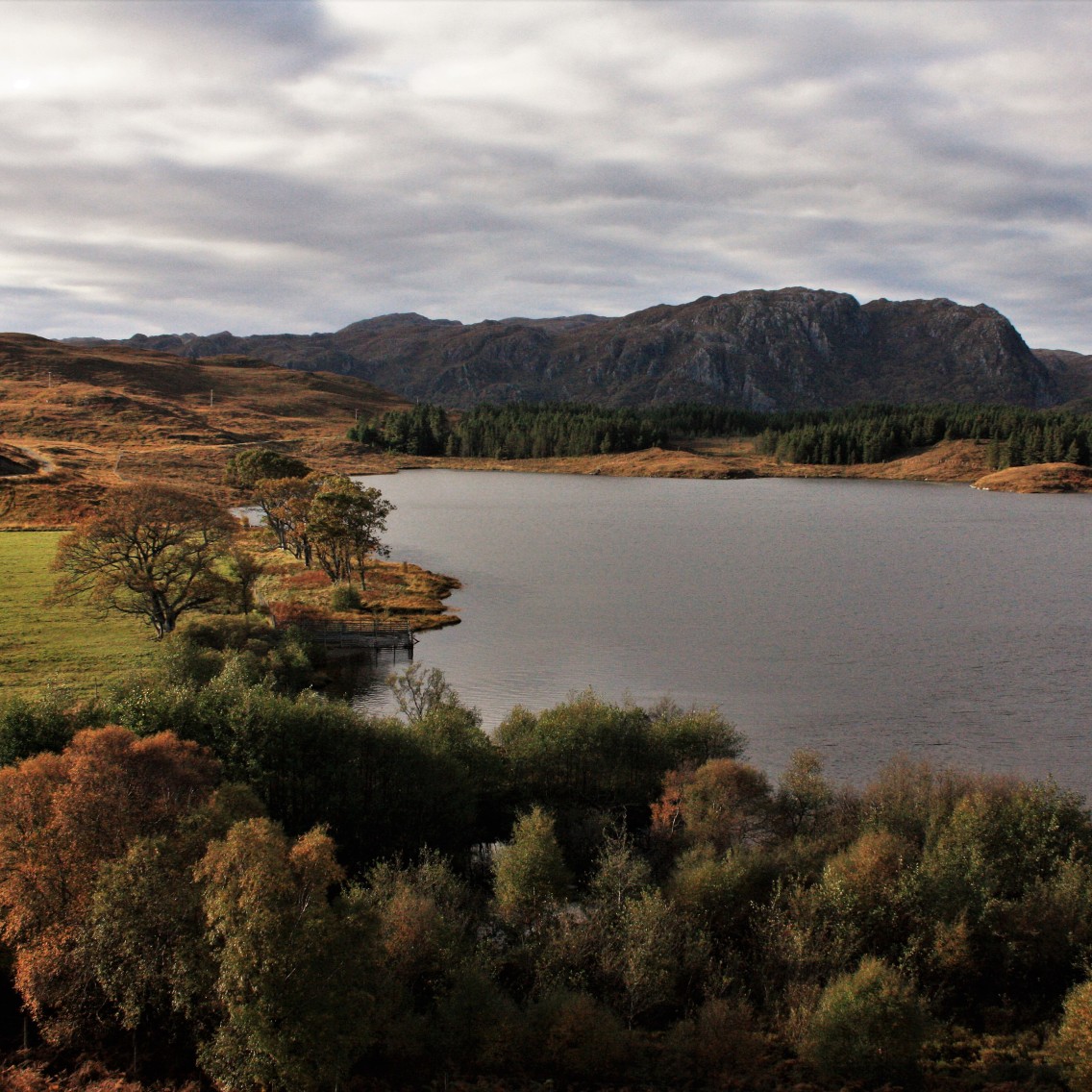 The ruin is clearly home to the birds in the area one of which we disturbed on our approach, we think it may have been a green shank, they nest in the long grass on the moorland. There was a sudden squawk right beside us, a frantic flap of wings and it was gone in a flash. After the screaming had stopped and the fear had subsided we composed ourselves from the fright of the potential bird attack and ventured into the ruin. It was mainly just covered in bird droppings inside, unsurprisingly!

Once Loch Kernsary is out of sight you begin to follow the rough 4×4 track that takes you through Kernsary Forest and which is sign posted Carnmore. At this stage we were roughly only 1hr 30mins into our walk. Maybe we should spend less time poking through old buildings and more time on the walking!

Just before entering the forest there is a lovely area filled with deciduous trees and craggy rock faces with hundreds of moss covered stones, possibly the perfect spot to find Ghillie Dhu. 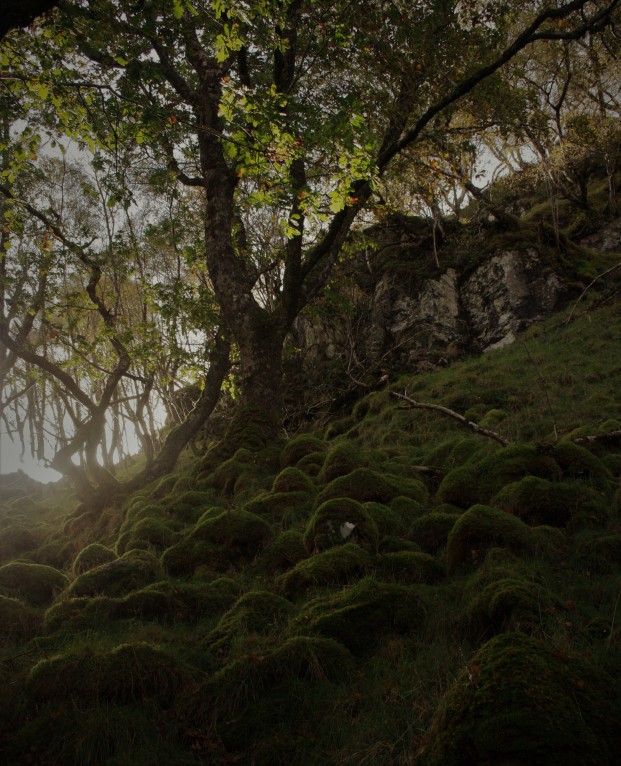 The track through Kernsary Forest was in pretty good condition but we came across several large puddles which required detours through the edges of the forest. We found evidence of the Pine Marten along the track but alas there was no sign of him nearby, when it comes to the local Pine Marten population they never seem to want to  meet us, we will keep hoping!

Emerging out of the forest Loch Ewe can just be seen with the settlement of Naast on the Cove peninsula just beyond.

This section of the walk covers a very large area of moorland and after a couple of miles the fantastic views of the surrounding hills come into view. With Sgurr na Laocainn on the far left, then Ruadh Stac Mor in the distance with A’Mhaighdean in front and Beinn Lair peeping round to the right next is Meall Mheinnidh and lastly in the shade the foot of Beinn Airigh Charr.

Before crossing Abhainn an t’Strathan Buidhe the path forks, it is possible to follow the track to the right which heads up between Meall Mheinnidh and Beinn Lair to find the footbridge if the river is in spate or alternatively you can stay on the track heading to the causeway but it means crossing the river by hopping over the rocks. The river wasn’t particularly high so we managed to find several boulders to hop over.

There were several deer in this particular area which we spooked as we were down wind but all along this track from Beinn Airigh Charr to the causeway we could hear stags roaring in the distance.

Just before reaching the causeway the little pebble beach on the banks of Fionn Loch was a nice little suntrap.

The wind had decided to whip up by the causeway and the water was splashing over the rocks onto the path. To the right of the causeway, on Dubh Loch, there were 2 adult whooper swans with 4 young that were happily bobbing around in the crashing waves with a pretty gusty wind hitting them full in the face. To the left of the causeway around the corner on Fionn Loch the water was gently lapping against the rocks and the wind was nowhere to be seen. I think the swans needed to rethink their resting spot. 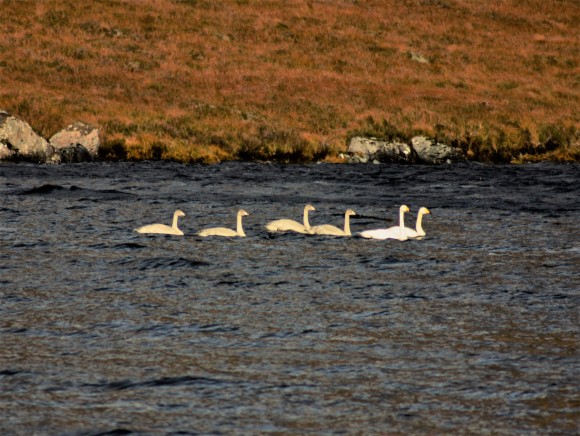 By the middle of the causeway was this sign asking walkers to appreciate the area and not abuse it, by the looks of things a stalker had decided to use it for target practice!

The walk from  Poolewe to the causeway had taken 4hrs, looking at the time we decided to stop for lunch, as we weren’t camping it was apparent that we would need to begin our return journey sharpish if we were to make it back to Poolewe before sunset. Being late October we had 4hrs of daylight left, so we ate quickly and headed back along the track we had come unfortunately we didn’t have time to visit the bothy and lodge on this occasion.

Before crossing the river we came across what looked to be the remains of an old roundhouse and a little further along the track walking alongside Beinn Airigh Charr there is a fairly large rockfall which weirdly we hadn’t spotted on the way out. It may have been around the time we were scared out of our wits by two red grouse flying up from right beside the path. There seems to be a theme occurring!

We just made it back to Poolewe as the sun was going down, 3 extremely helpful sheep helped to direct us along the path so that we didn’t accidentally veer off in the dim light. We managed to shave an hour off on the walk back instead of the 4hrs going out we made it back to Poolewe in 3hrs, possibly the prospect of walking in one of the most remote areas in Britain in the pitch black spurred us on.

A long, long 18 mile walk on mostly good tracks. Well worth it to see ‘The Great Wilderness’