On a visit to Gairloch recently we purchased a booklet which we have been meaning to buy for some time, there is a collection of these booklets all covering the local area detailing the history, the people and the landscape.

We purchased 2 booklets, the first being ‘Looking at Laide and the area upwards towards Mellon Udrigle and along to Gruinard’  and the second being ‘Around Aultbea from Drumchork to Slaggan’.

During a rainy evenings perusal we discovered a little about the history of First Coast, Second Coast and Third Coast which we were completely unaware that a Third Coast had even existed.

So today being a beautiful March day, we headed out of Laide towards the 3 coasts to see for ourselves what we had read about in the booklet.

After 15 minutes admiring them lounging on the rocks itching a little scratch here and there it was time to get going.

The photo below shows First Coast with Second Coast on the brow of the hill. Is that all there is i hear you say!! 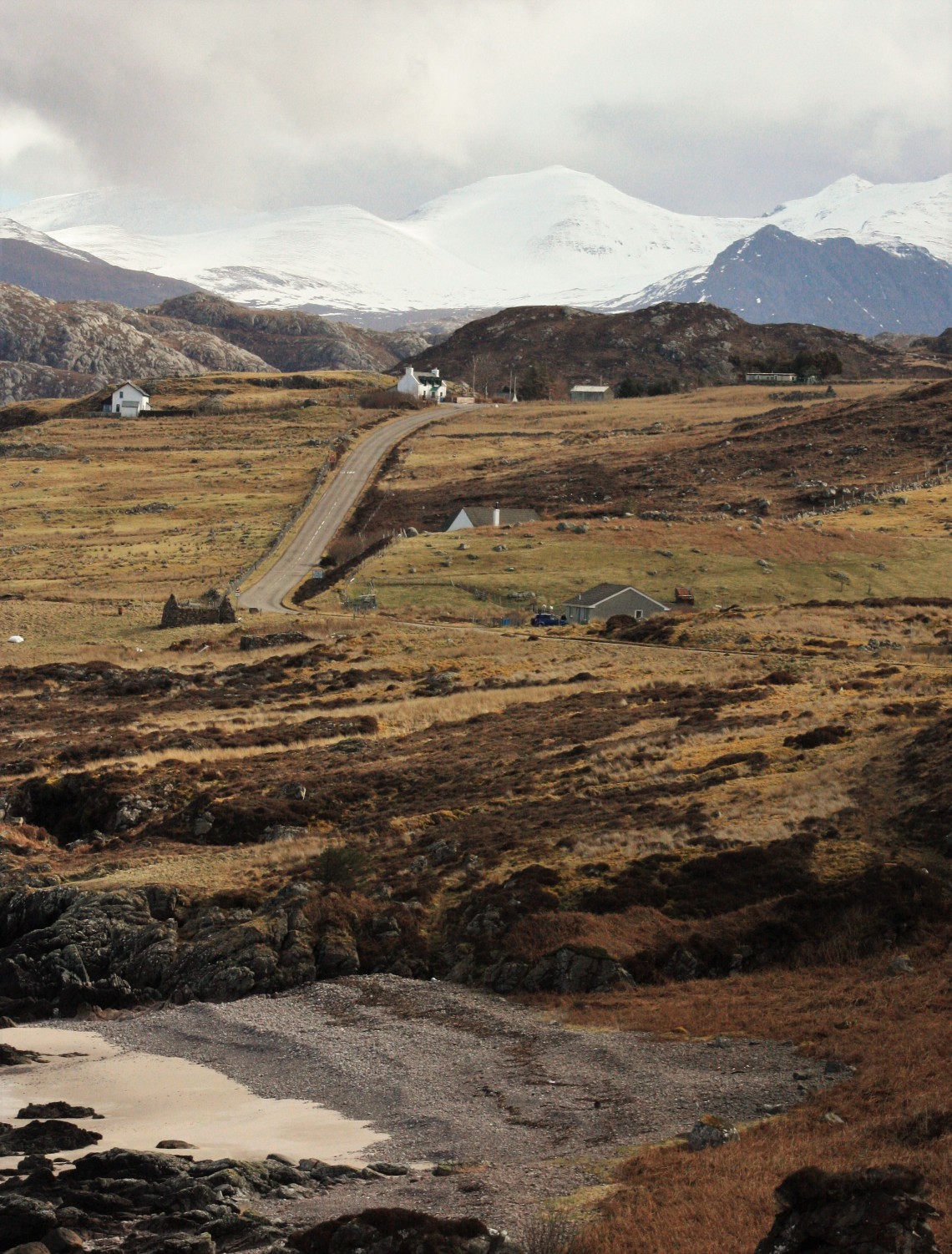 Well details from the 1841 Census describe First Coast as having 14 households and 77 inhabitants, Second Coast having 23 households and 100 inhabitants and Third coast having 5 households and 29 inhabitants. It’s hard to imagine how busy the area must have been nearly 200 years ago but there are a few reminders here and there, the odd ruined blackhouse with stone walls surrounding several of these ruins.

Third Coast is recorded as having a mill on both the first and second OS Maps, according to the 1841 Census the mill was in operation and from 1846 – 1901 the mill was operated by the Forbes family.  In J.H.Dixon’s book published in 1886 – Gairloch and Guide to Loch Maree – Dixon mentions the burn that ‘joins the sea in the bay below the village, sometimes called Mill Bay, because of the mill which formerly stood at the foot of the burn’, suggesting that the mill was no longer in use but the 1901 Census records a Kenneth Forbes as being the miller.

Halfway down the footpath the mill emerges 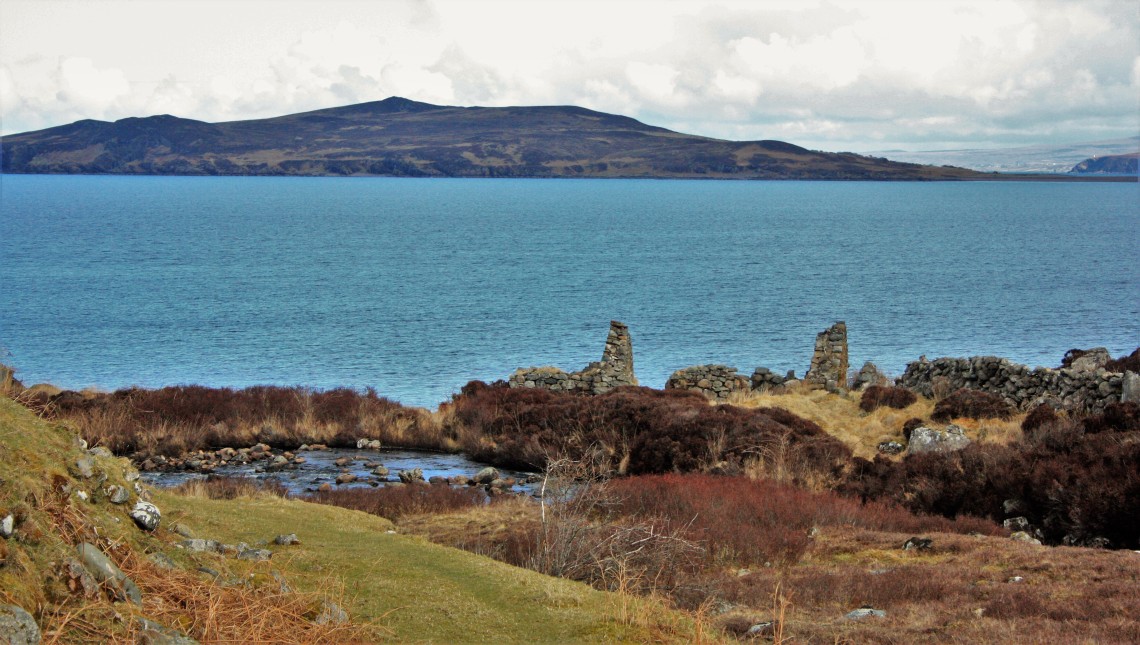 Now all that remains are the ruined stone walls of the main building being the mill and a kiln room on the side.

On reaching the end of the track it took just a couple of minutes of scanning the river to realise it was pretty deep in places so there was nothing for it but to get the boots off & treat the toes to a little spa treatment.

You may want to avert your eyes!

The sheltered little bay where the now derelict mill stands is a wonderful  spot overlooking Gruinard Bay, it’s the perfect place to stroll on a sunny day and imagine a busy hamlet of people bringing their crops to be ground and the miller housed under a thatch roof sweating over his millstones. 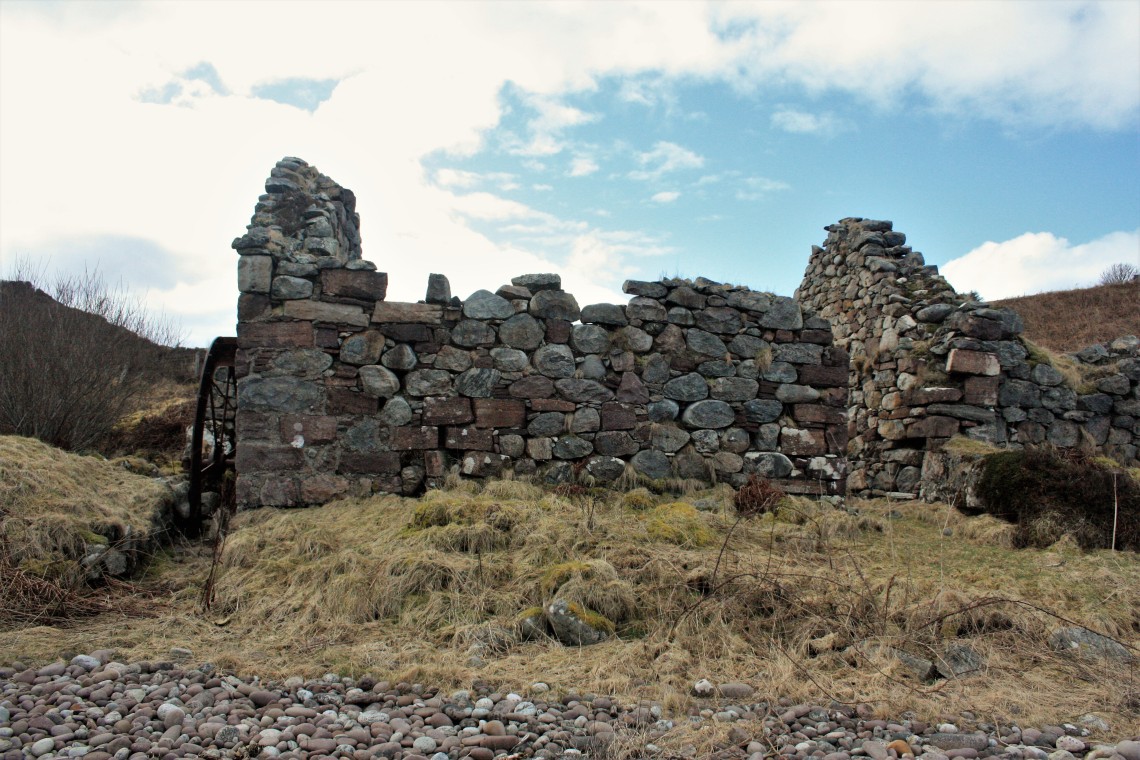 The millstones still remain but unfortunately they are no longer in position The corroded water wheel is still attached on the outside with the Lade being visible beneath. 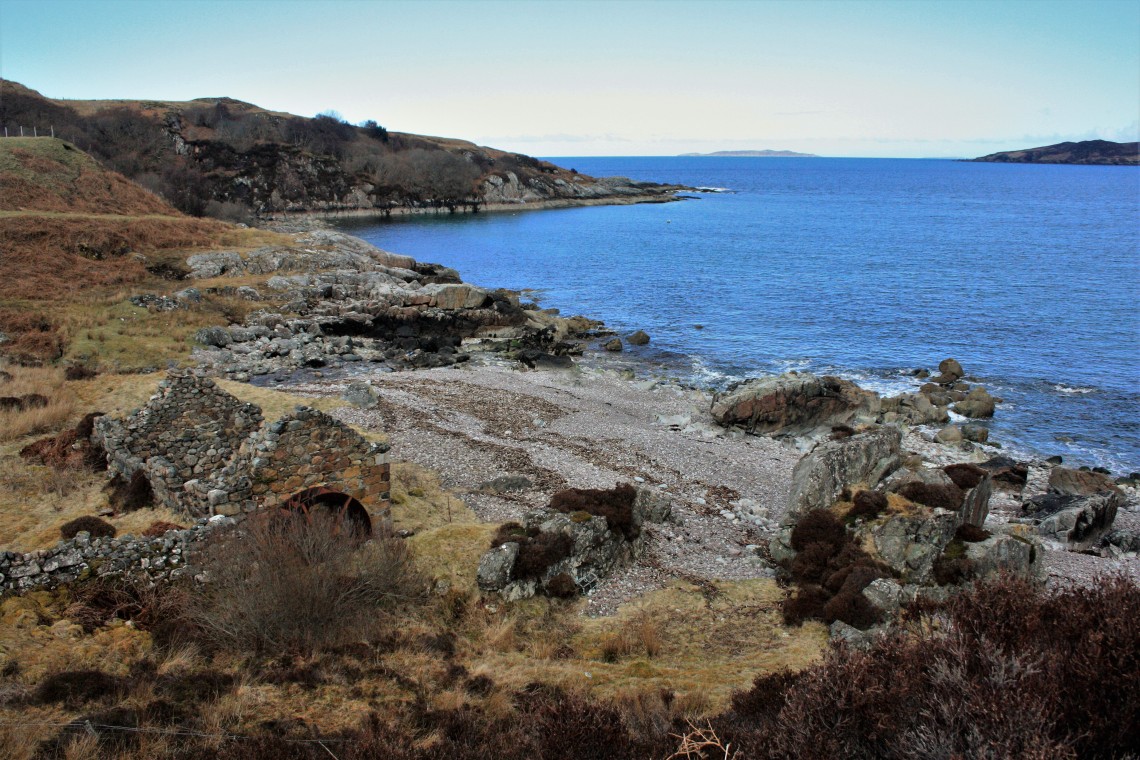 After spending some time wandering around the mill and admiring the view over the bay we climbed to slightly higher ground to see the view over towards Gruinard beach. Thankfully we had our binoculars with us as what we thought were horses turned out to be a small group of feral goats that had discovered a lush patch of grass. 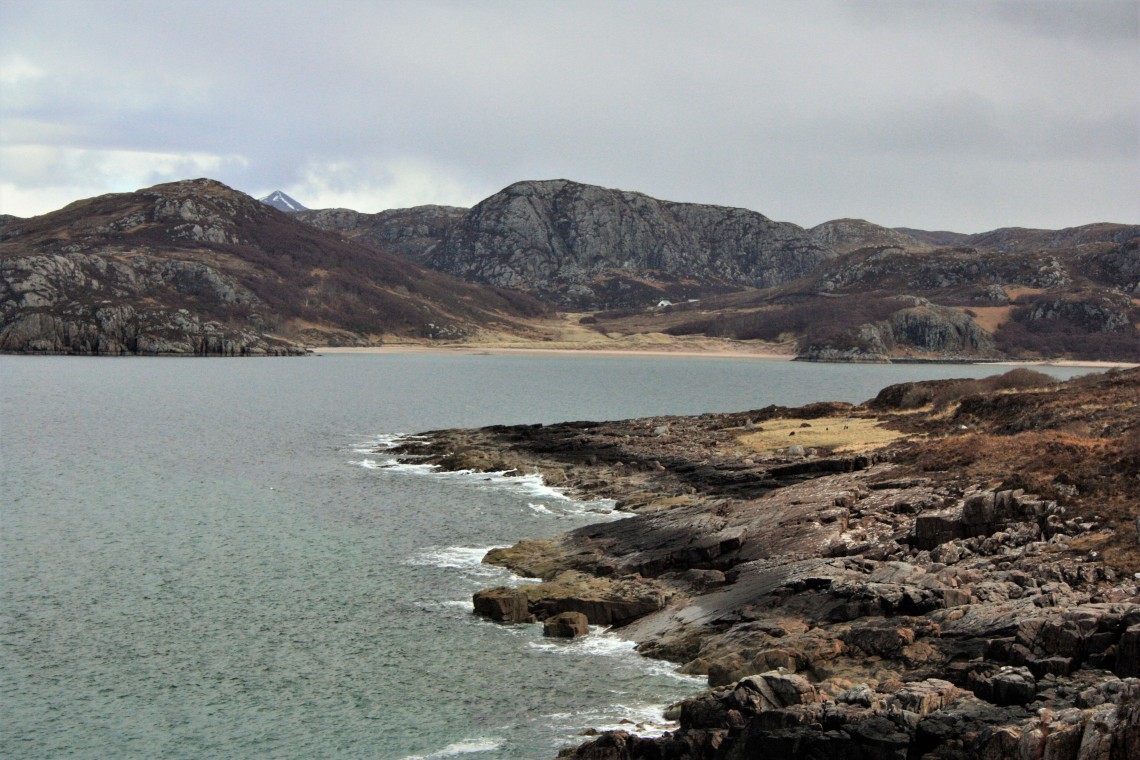 Heading back towards the road we waded through the bracken and stumbled across Third Coast hidden beneath the heather, moss and mouse tunnels. Nature had very much taken hold of the smallest of the three settlements. 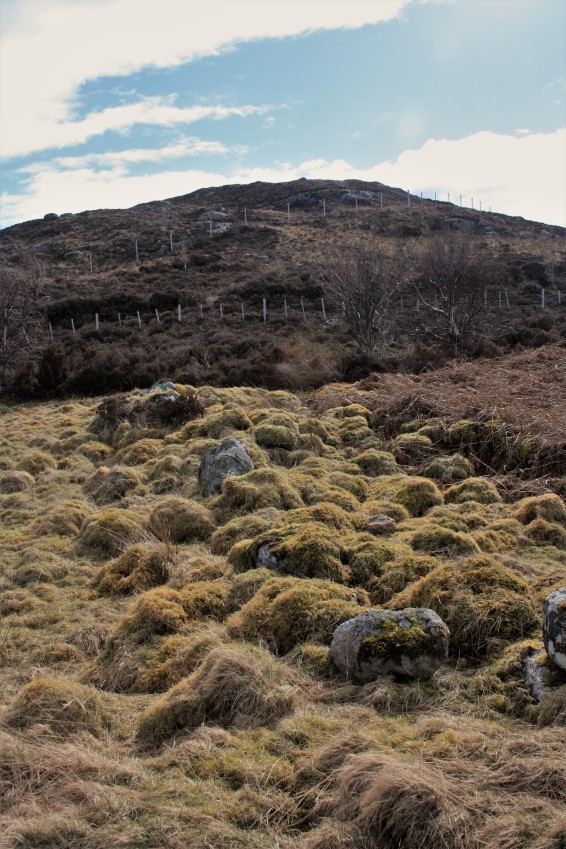 Returning to the road it was time for a detour, we hopped over the heather to stick our noses into a very small doorway that we have seen many times tucked into the hillside from the road 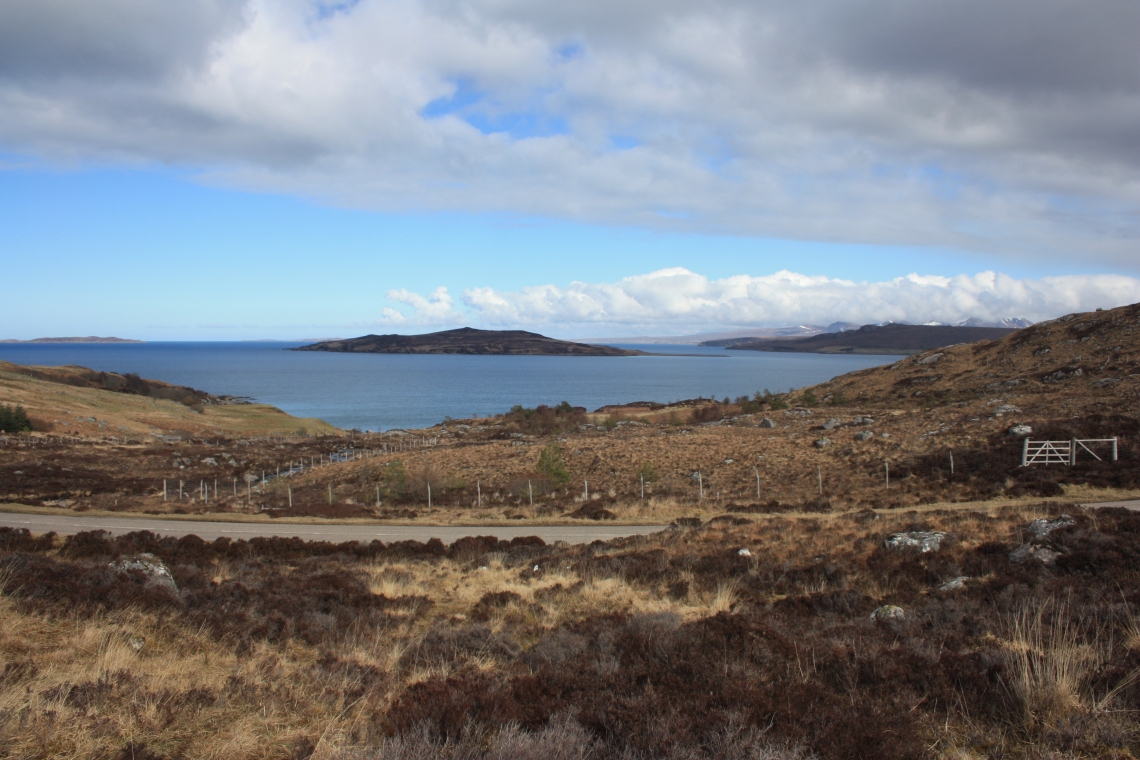 It turns out this was once the place where dynamite was stored at the time road building was taking place in the area.

A great little walk full of history just down the road from the b&b. We’ll certainly make this walk to a lovely a little bay a regular occurrence.

For anyone interested in purchasing the great booklets about Wester Ross they are available from The Gale Centre, Gairloch and The Heritage Museum also in Gairloch. 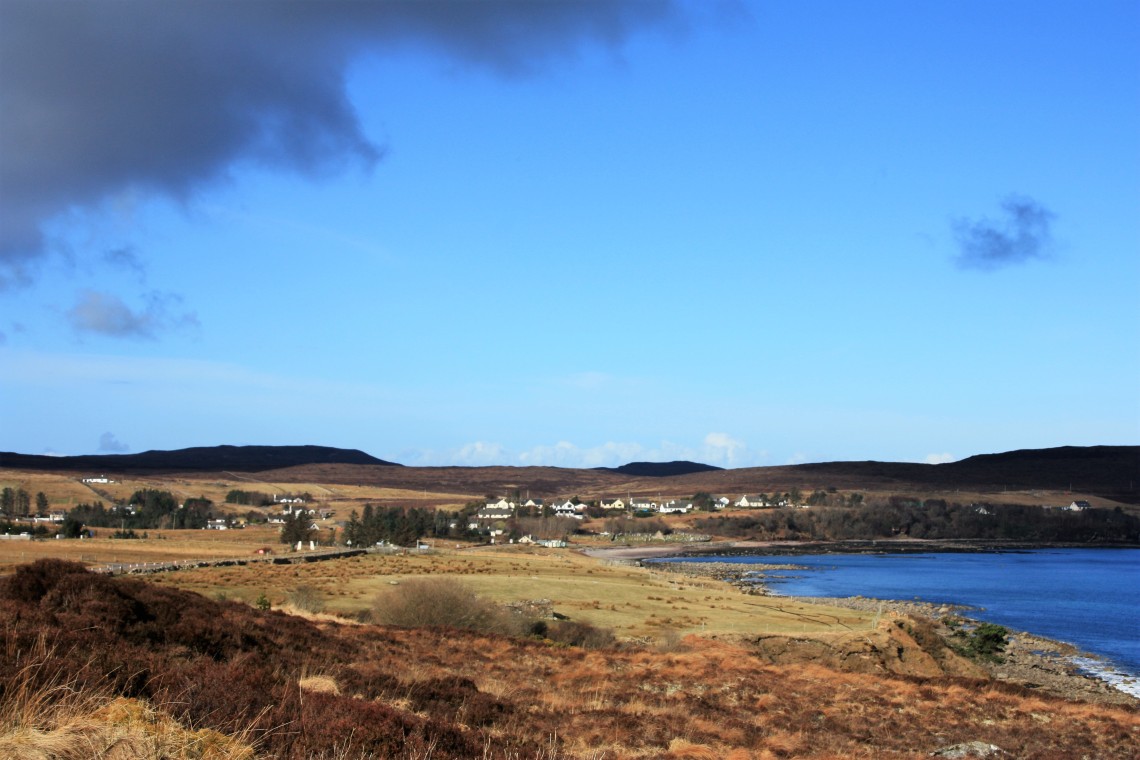