Sometimes you get the perfect winter day. Snow on the hill tops. Wall to wall clear blue skies with great visibility. Cold & crisp with not a breath of breeze.

On such a day you could do worse than visit the trig point that overlooks Laide & Aultbea. At just 293 meters Beinn Dearg Bad Chailleach is only a hillock but it does command superb 360 degree views. All of the local hills are on show & on a clear day the peaks of Skye, Harris & Sutherland can all be taken in.

It’s a walk that’s probably best undertaken when either there has been a hard frost or following a very dry spell. For certain sections bog snorkeling would be the order of the day in normal ground conditions.

The trig point takes a couple of hours to reach from Laide & on a good day it’s easy to spend an hour or two at the top admiring the views.

Whilst we weren’t lucky enough to see much wildlife on our walk this time, we did see clear evidence of the tracks of mountain hare, deer & grouse in the snow. Right beside the trig point there were mountain hare droppings & the fur pellet from what looks to have been from an eagle. The trig point would be a great vantage point for an eagle, but not so good for the hare!!

The sun rising above An Teallach with silhouettes of Beinn Ghobhlach & The Coigachs.

The heather moorland behind Laide. You might just be able to make out the bright dot to the right (it was exceptionally bright to the naked eye, not so much in the photo). Planet or satellite?

Views to the North with the sun beginning to shine on the very tips of the peaks. The Coigachs, Quinag & Foinaven prominent. The tops of Suilven & Stac Pollaidh can be seen (Stac Pollaidh only just). Foinaven is close to Kinlochbervie,  90 miles or so to the North of Laide.

A closer look  at Quinag with Foinaven to the left & the top of the iconic Suilven to the right. 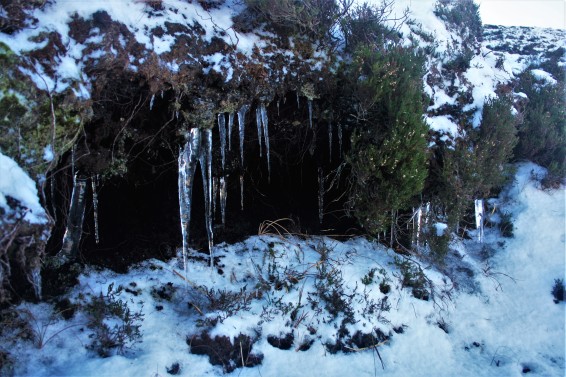 Trudging over the moorland we came across several peat overhangs with some sharp looking teeth!! Brrrrrr!

A couple of hours in and the old timer needs to prop himself up on the trig point.

Looking South. The trig point was doing a fine job of obscuring the winter sun. Here we found the fur pellet where something had chosen the trig to perch and dispose of it’s fur ball.

Loch Fada in the foreground, with Beinn Airigh Charr , A Mhaighdean  & Ruadh Stac Mor in the distance.

The view over Aultbea. Whilst it’s difficult to see from this image, beneath the cloud line the hills of Harris were visible to the naked eye.

The Calmac ferry leaving Ullapool and on it’s way to Stornoway.

A lovely view of Laide, perched on the shores of Gruinard Bay 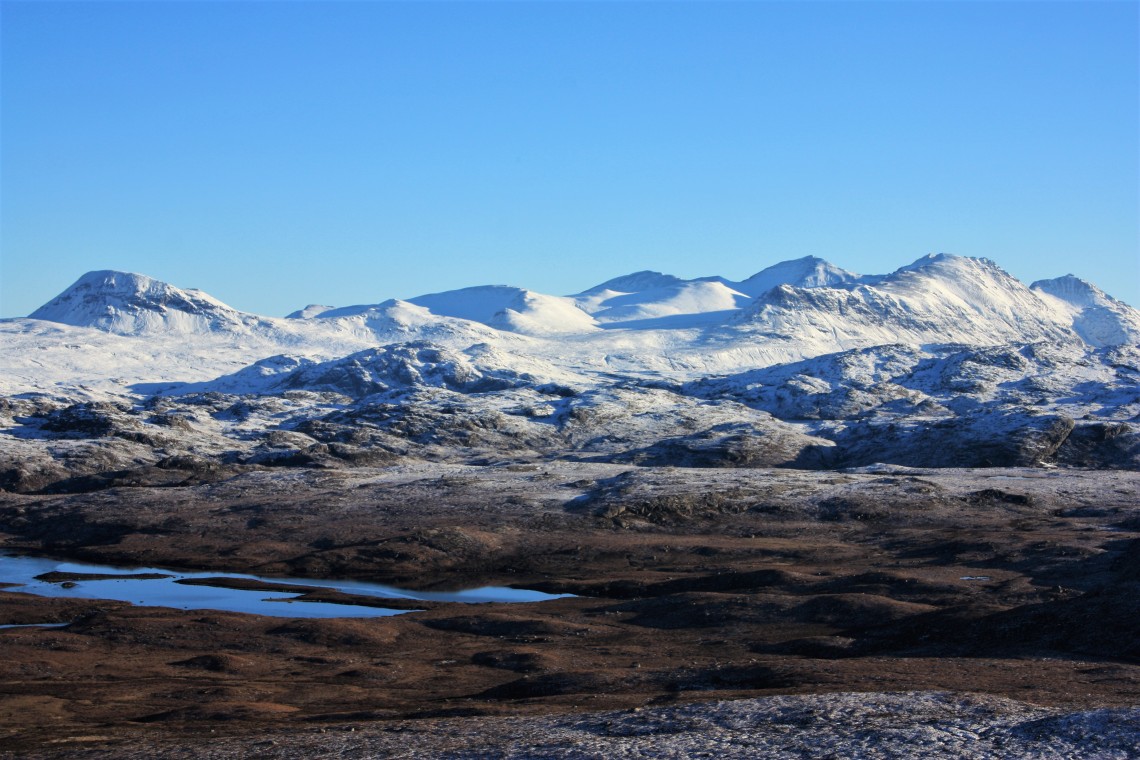 An Teallach & Sail Mhor looking splendid in the midday sunshine. 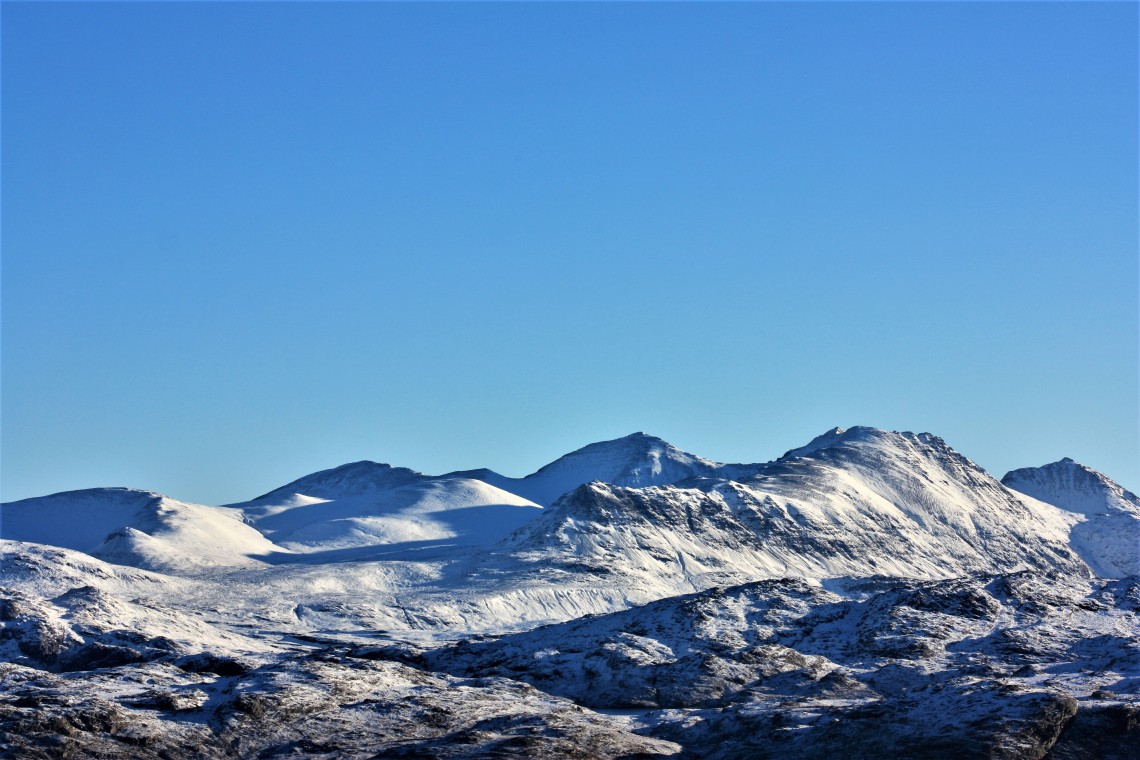 The slopes of An Teallach. It would have been a challenging day on the very high tops today!

Sail Mhor. The last time we were on Sail Mhor the Ptarmigan were vocalising because of the overhead threat of a golden eagle.

Beinn Ghoblach, the forked mountain. It might only be just over 600 meters in height but looking over Scoraig it does impress as it towers over Little Loch Broom.

The impressive slopes of Quinag. In the snow quite a daunting looking prospect from every angle. 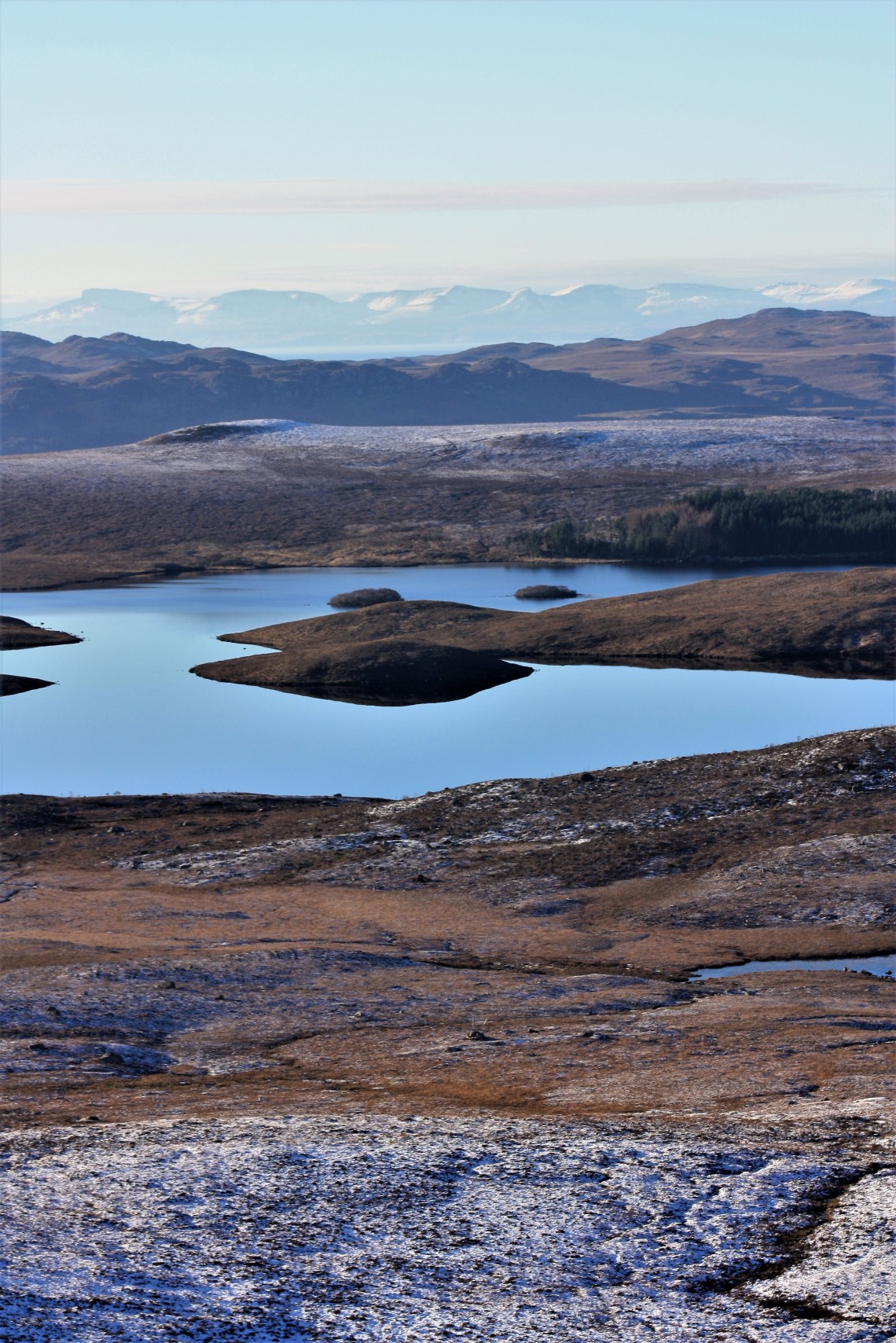 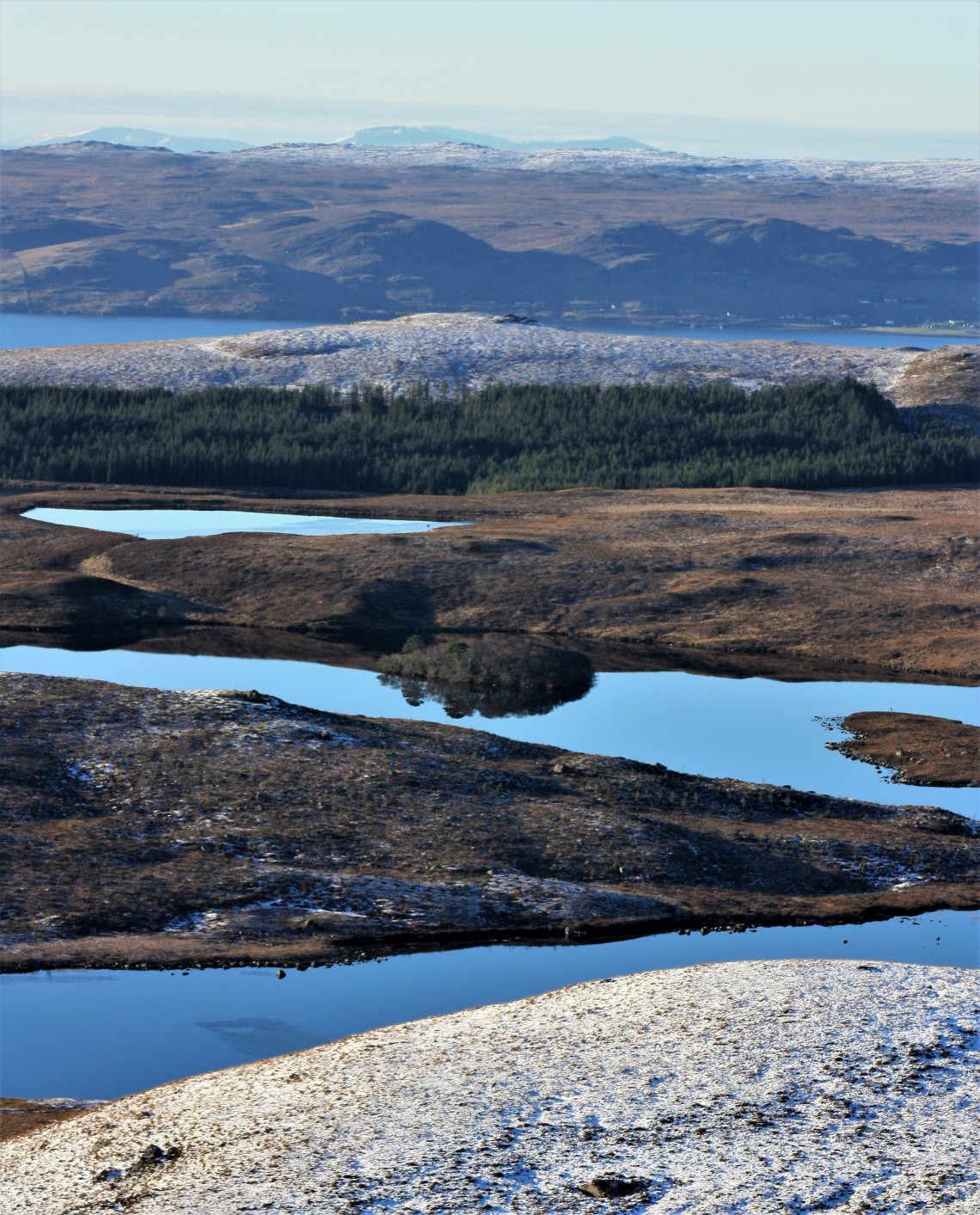 Loch a Bhaid-luachraich. A mirror lock in the still conditions. The snowy hills on the Isle of Skye poking above the heather clad hills of Wester Ross.

After spending some considerable time by the trig point admiring every view through the camera and the binoculars and tracking the varied animal prints in the snow we tore ourselves away and walked home. 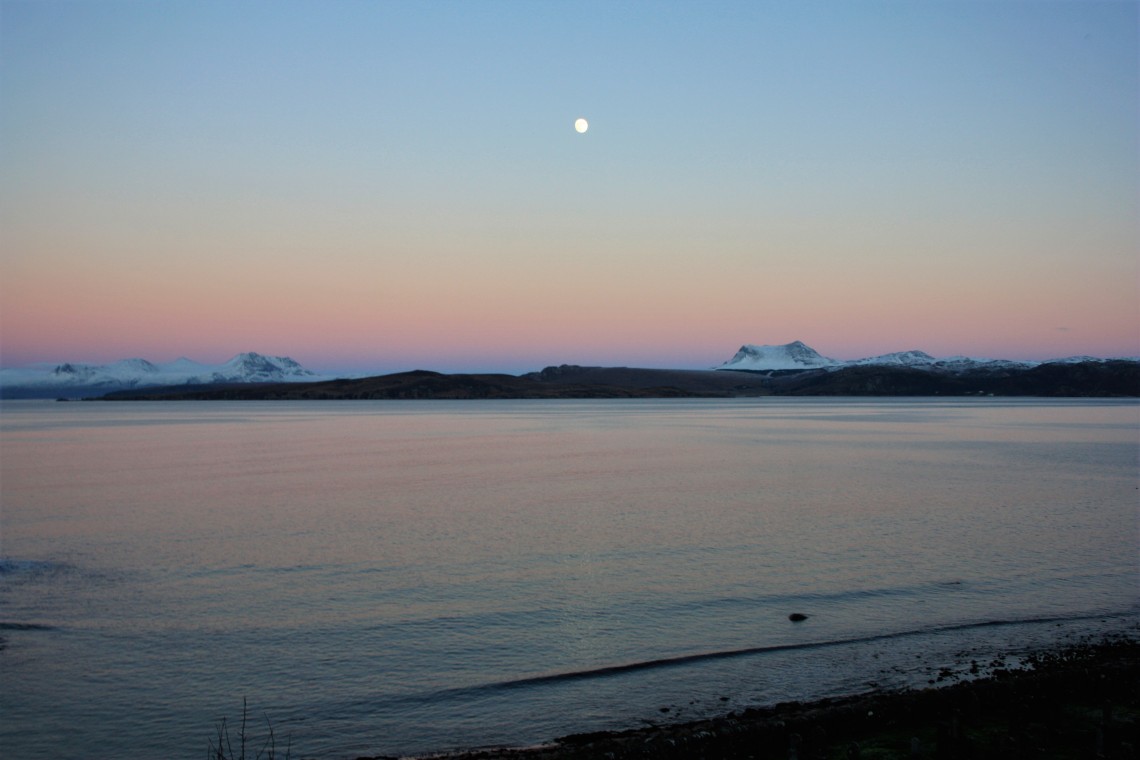 By late afternoon the sun began it’s descent over Laide, pink light glowing over the snowy caps with the moon perfectly positioned between the Coigachs and Beinn Ghoblach. A little bit later with the sun set, the moon was shimmering on the still, pond like sea.

The Oystercatchers on Laide beach getting themselves settled in for an early evening snooze. Usually quite skittish they were unconcerned by the visitor busy taking photos as the sun set. 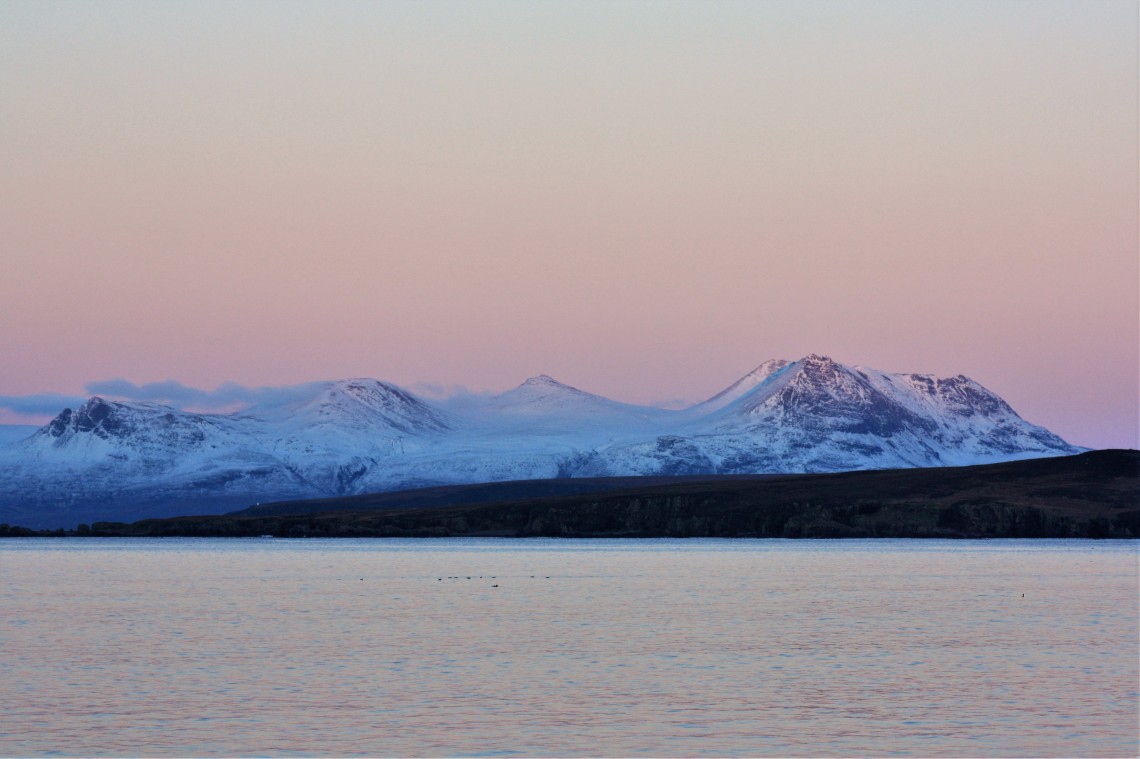 The last of the daylight, the sun disappears and for just a few more minutes leaves a beautiful glow in the sky over An Teallach, Sail Mhor, Beinn Ghoblach & The Coigachs. The perfect end to the perfect winters day in Wester Ross.