The walk begins in the village of Lower Diabaig passing by the pier where the views over the loch are stunning, heading along the road to the end of the village the route enters a small woodland of deciduous trees where for a few minutes at least there is a bit of a scramble up the cliff side and over the rocks but the path is mainly clear. 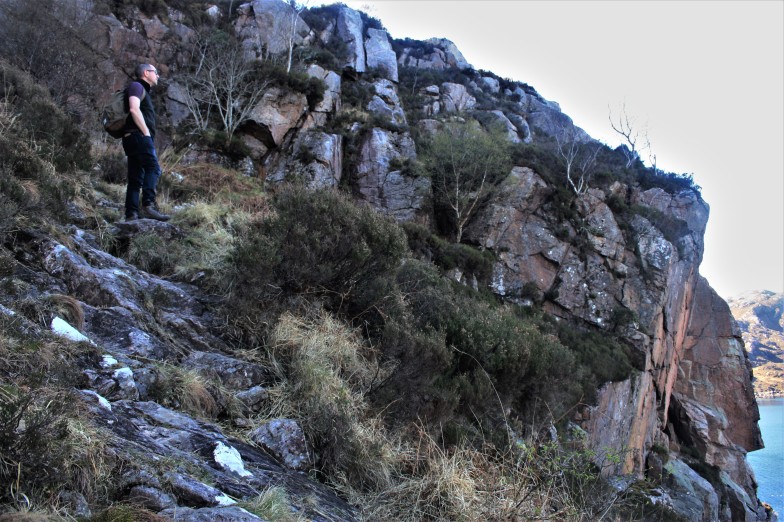 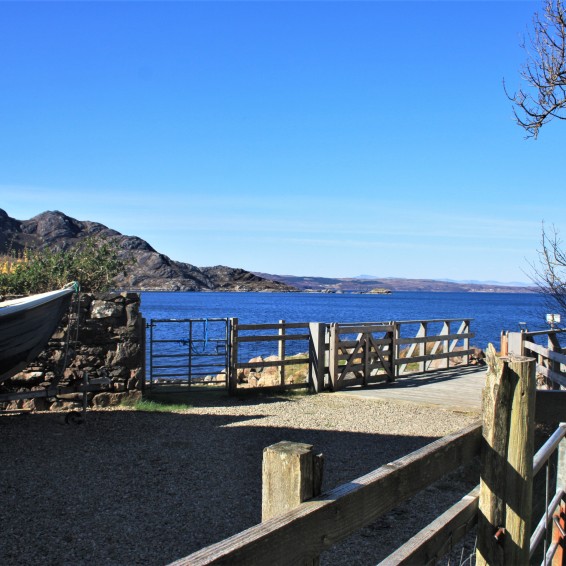 Once above the tree tops the view over the sea is spectacular, the Isle of Skye just visible through the haze

The village of Diabaig basking in the April sunshine

Curving around Loch Diabaig is the rugged headland of Rubha na h-Airde, apparently a good example of Lewisian Gneiss, the oldest rock in the uk 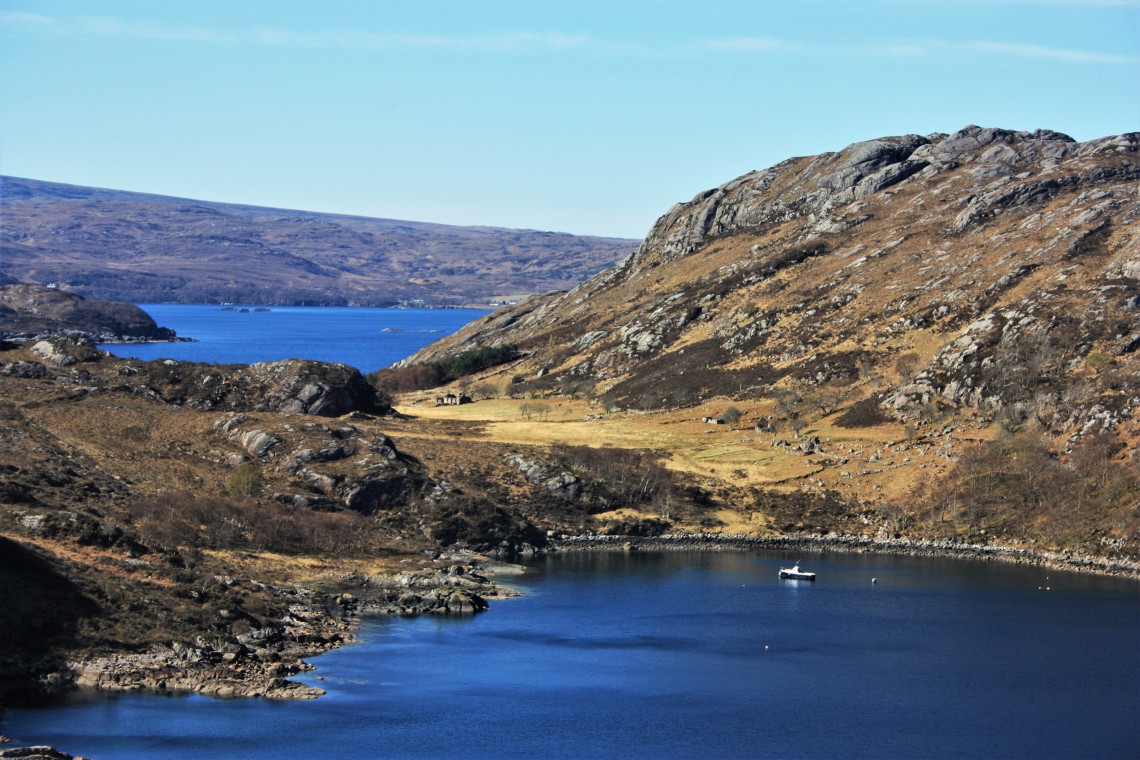 The route continues over the moorland passing a couple of small lochans, Loch a’ Bhealaich Mhoir & Lochan Dubh. The path running alongside the lochs looked like it could possibly be boggy after a wet spell but we were grateful for several weeks of dry weather. 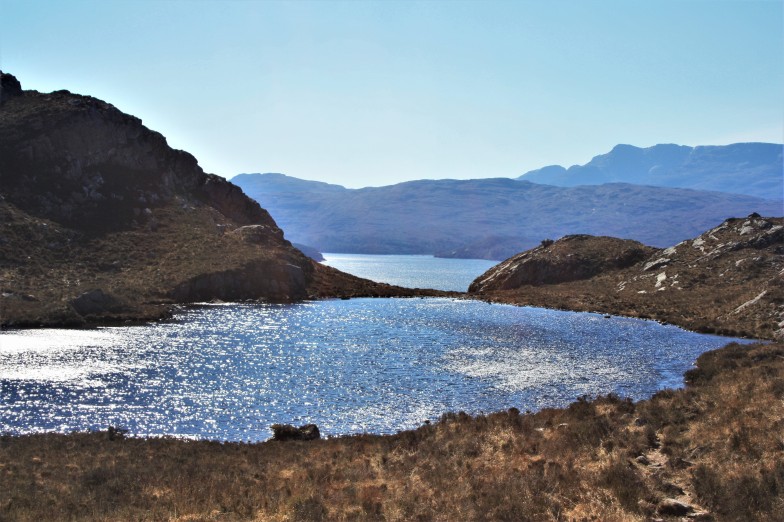 As the path descends the view opens up taking in Shieldaig over Loch Torridon. Below is a secluded cottage only accessible via the path or a boat. 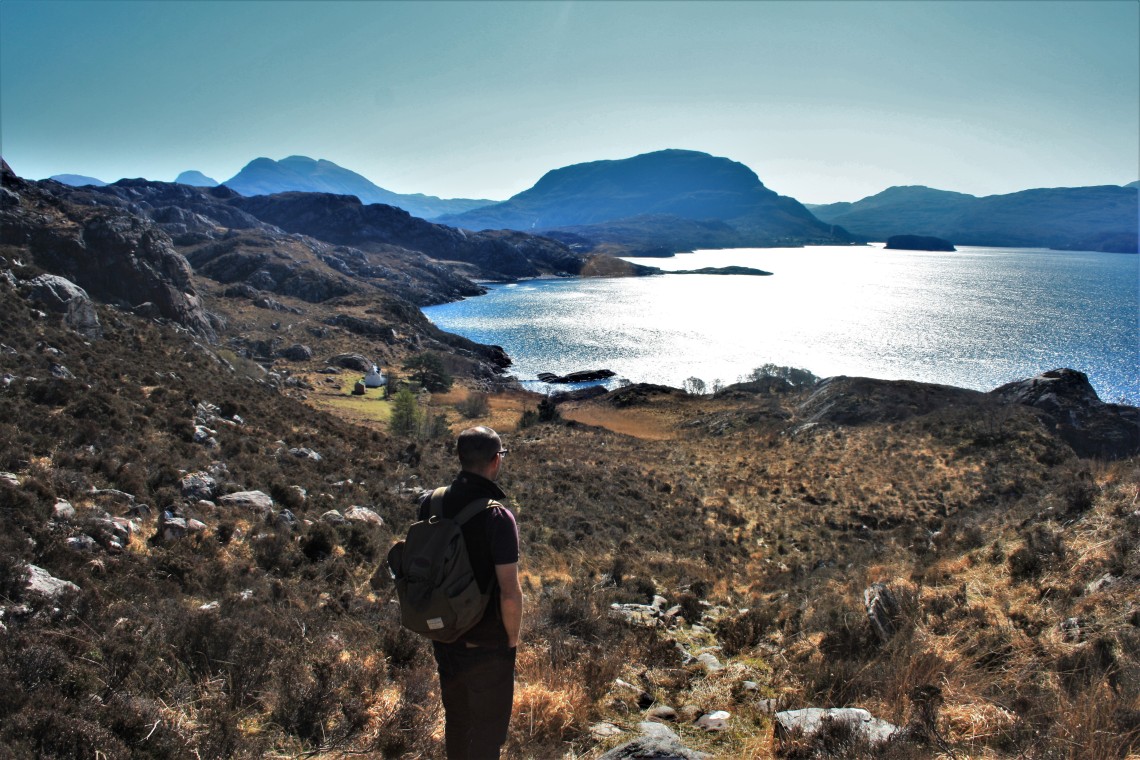 There were several wild flowers along the route, the pretty wild dog violet and the cheerful primrose sparkling in the sun

Overlooking the remote cottage on the slopes of the hillside was another ruined building nestled in a sea of dried bracken. The view across Loch Torridon is breathtaking 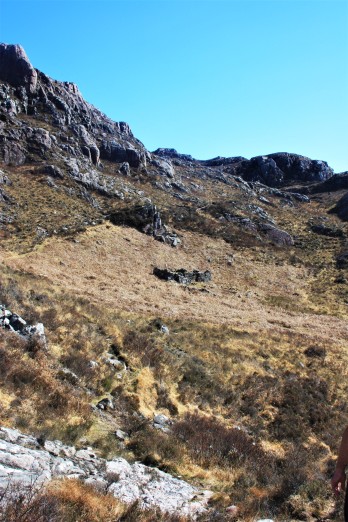 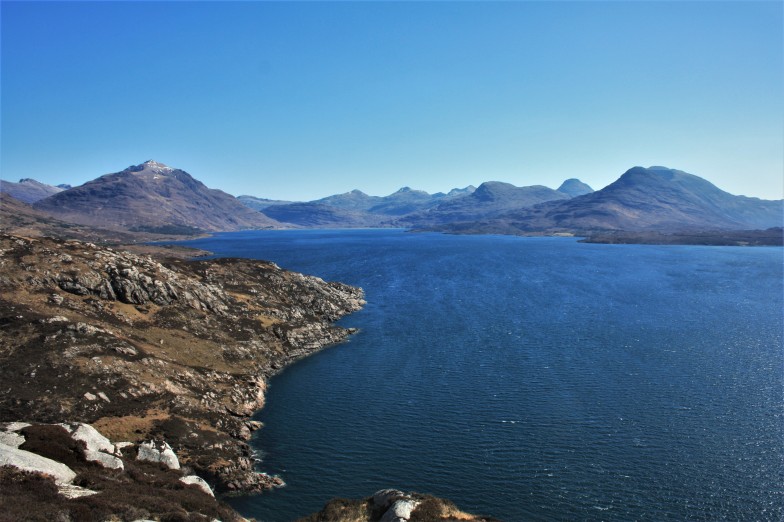 Further along the coastal route the path takes you through the heathland and begins to descend. The view ahead is of the small village of Wester Alligin surrounded by crofters fields on the shore of Loch Torridon 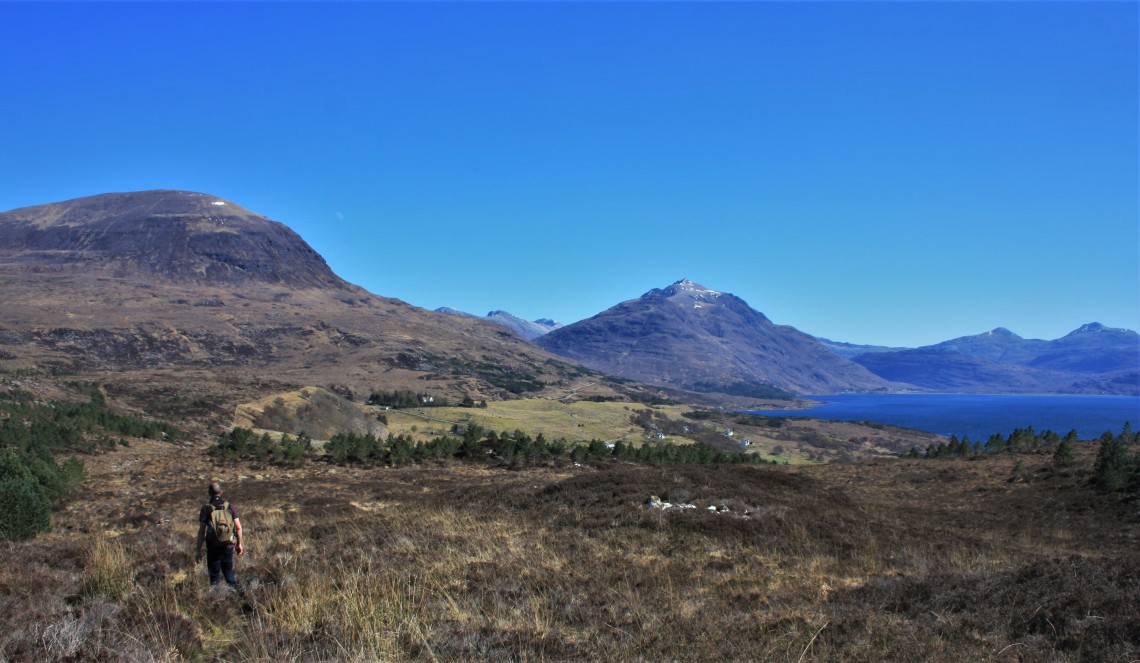 Towering protectively over the shore side villages is the imposing Liathach, at 1053m the peak looks fairly gentle and inviting from the this view but viewed from the east it looks anything but gentle & inviting. 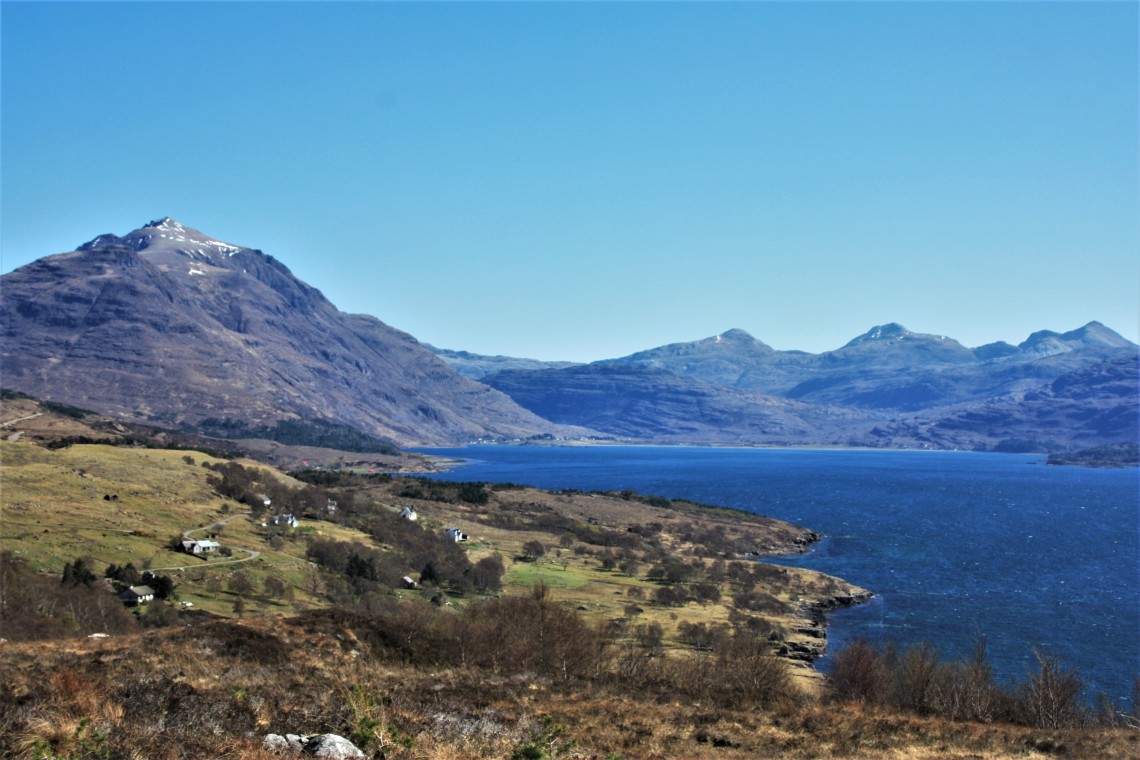 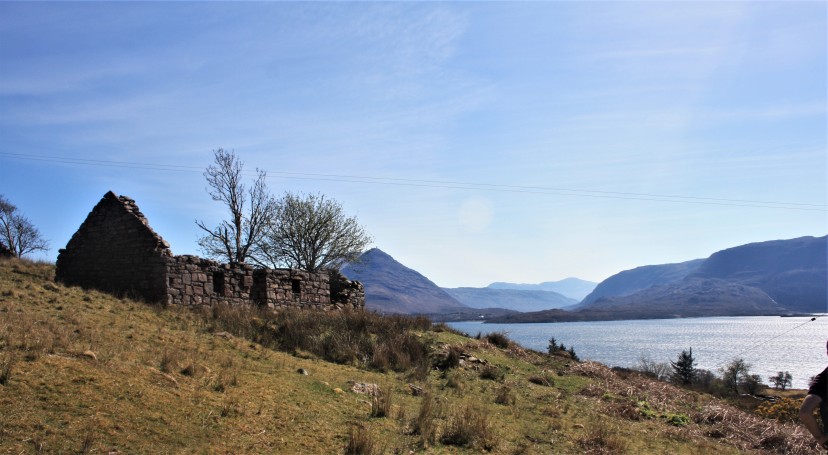 A spectacular view over the water of the 2 summits of Beinn Damh ‘the stag mountain’ & Maol Chean-Dearg which in Gaelic means ‘bald red head’!!!

Heading away from the road the path heads left down towards Loch Diabaigas Airde, legend has it that a Kelpie lives in this loch, we made sure to stay well clear. 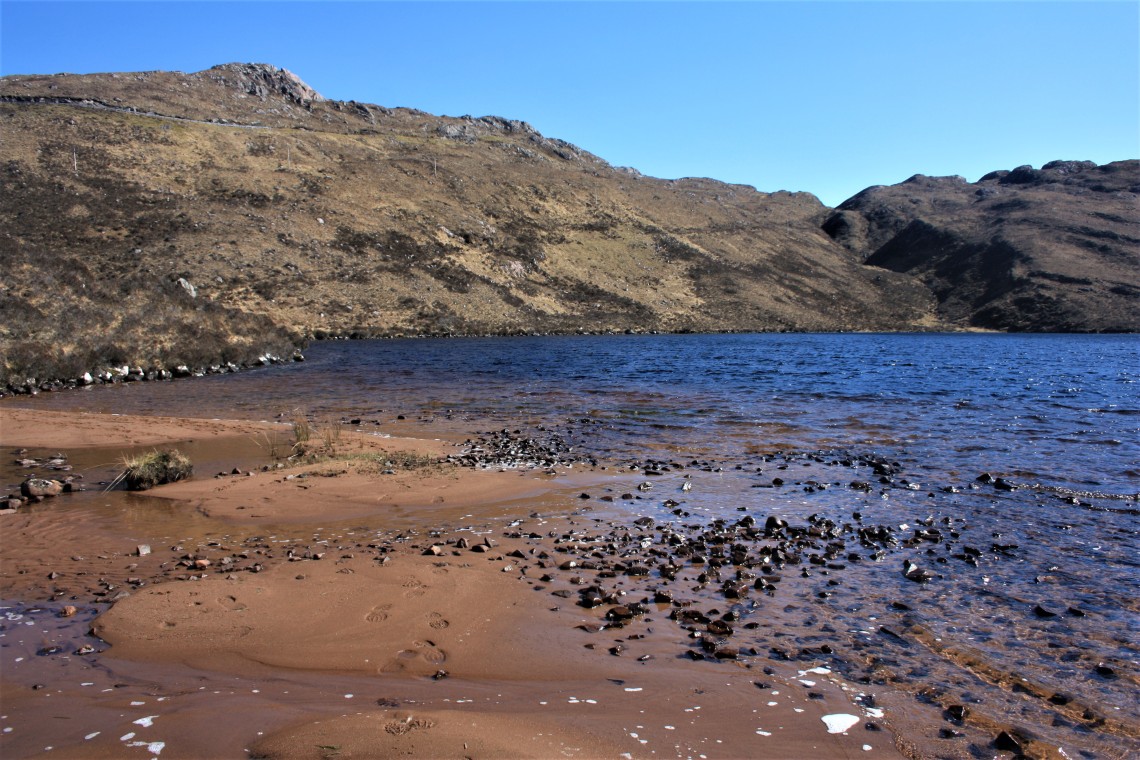 The route alongside the loch could potentially be very boggy after bad weather and there is a stile to cross over a deer fence which is currently in a bad state of repair. After leaving the loch side and heading up towards a ruin you rejoin the road for a short spell. Whilst walking the short distance along the road the moorland to the right hand side of the road is where a large fire took hold last summer after some visitors to the area had a barbecue and unfortunately didn’t douse it with water when they had finished. What remains is a sad sight.

If you do have to use a disposable (or any other kind) barbecue please put them out properly, most people generally have a bottle of water with them or if not this is the highlands and there is bound to be a loch or burn nearby, please also take them away with you, they can be devastating to the land and wildlife.

Several cases like this have happened again in the area this spring.

At the end of the loch you take a left off the road walking across a small footbridge, the path then takes you alongside the Allt an Uain gorge, a great spot with lots of wildflowers on the slopes and very small birds flitting over our heads,  annoyingly they wouldn’t stay still long enough for us to identify them. 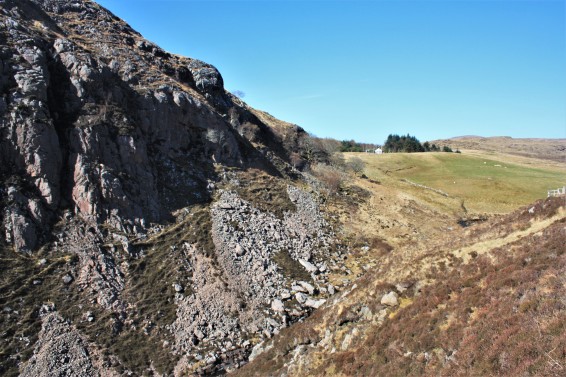 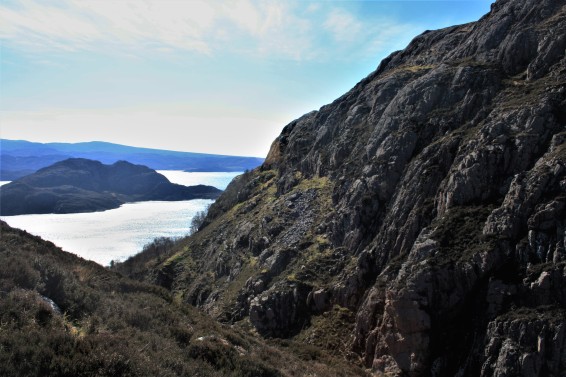 Descending down toward the village you walk through a beautiful deciduous woodland which is a place that makes you stop, take 5 minutes and admire the textures and colours all around. A wonderful spot. 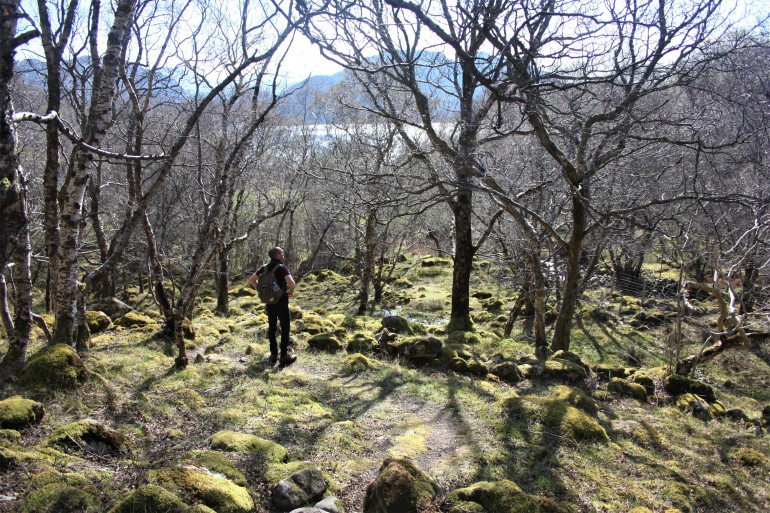 After a long dry spell and the shrubs & trees just coming into bud meant that we avoided the boggy ground and the wrestling match with the summer bracken. A wonderful walk alongside a stunning coastline.