It’s been a few years since we had the pleasure of spending time with (on) Beinn & with a quieter day this week we thought that it was time to reacquaint ourselves with old friends. Beinn Airigh Charr stands at 791 meters and therefore doesn’t command Munro status but it is a cracking Corbett with fantastic views of Loch Maree, Slioch, the Torridon hills and on a clear day the Isles of Skye, Uist, Lewis & Harris. 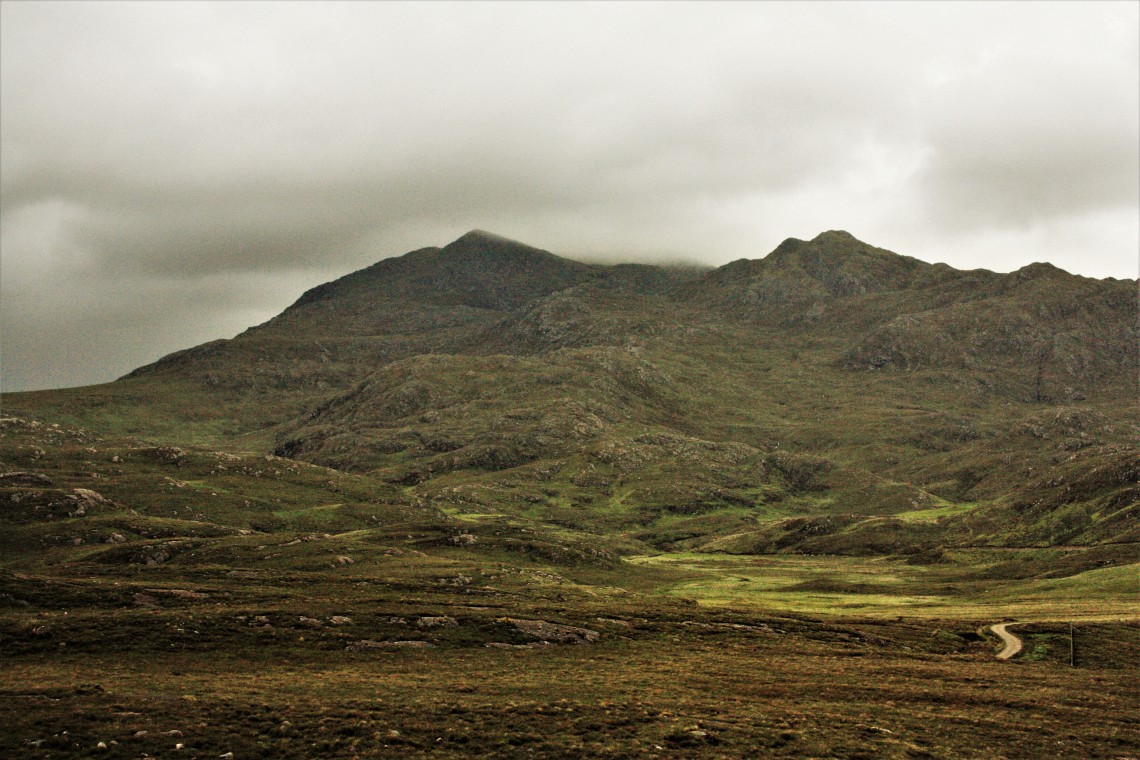 The walk can take anything from 6-8 hours and cover 13-15km depending upon which route you decide to take. Generally the walk starts from Poolewe and today I started from the car park beside the River Ewe. You can start the walk & follow the path that runs parallel with Loch Kernsary and which forms part of the lovely circular route around Kernsary but today I decided upon a more direct route following some of the stalking paths over the open moorland.

On the 15 minute drive over from Laide to Poolewe it was looking a little dreich and I was concerned that my time at the summit might be spoiled by the low cloud that was sitting at approx 500m. However by the time I’d got kitted out and ready to roll it was starting to break up & it looked as though it might be a fine day after all.

The first 45 minutes or so from the car park in Poolewe I followed the vehicle track that takes you into the Inveran estate and runs parallel with the River Ewe (which often has fishermen trying their best to catch Salmon and Sea Trout and today was no exception with 3 gents trying their luck). By the way of a short cut and to cut the corner off I decided against following the vehicle track all the way until Beinn Airigh Charr comes fully into sight. So after 45 minutes of the rough vehicle track it was time to off-road a little & follow an old stalkers track directly over the moorland of Silos Dubh. In the past we’ve disturbed herds of deer whilst following this route but alas non were on this section of the walk today (they’ve most likely relocated themselves in Laide given the numbers that have been seen locally recently. Hopefully we won’t see too many more in our garden digging up our new plants and veggies!). Whilst following the stalkers track it’s well worth taking a bit of a diversion to the highest point on the moorland ( a mere 129 meters). You get a great view down Loch Maree.

Once you’ve reached the end of the stalking track you rejoin the vehicle track for a few more minutes before taking a left and joining another stalkers track that takes you part of the way towards the Beinn. Its easy to miss the left turn (there is a small cairn as a marker) but if you keep your eyes peeled for what looks to have been an old dun then you can join the path from here. All you need to do is climb above the dun, head towards the old sheepfolds and you join the visible path.

From here the ascend starts. Its a fairly gradual climb with a clear and visible stalkers path for the first 500m or so.  Its a lovely walk, with lots to see and there is no harm in stopping to admire the views directly behind you as you start to gain height. Just as I started the ascent & just after I’d passed a great wee glen I managed to disturb the only deer of the day (they had clearly heard that I was passing through so their mates had no doubt headed off to Laide to pick off the new plants in the garden as I was out).

As you follow the path that runs alongside Allt Aconair. You soon gain height and come out in between the hills of Meall Chnaimhean (653m) & Spidean Nan Clach (705m). By now the path is very indistinct but its fairly easy to follow a route through the hills. From here its a case of finding a way up the Beinn. At this stage I think that I must have started to become a little bit disorientated because whilst starting the final ascent of Beinn Airigh Charr I felt sure that I was being watched. I saw in front of me what I thought was a large bird of prey looking down on me. Down went the rucksack & out came the camera. Several shots later & it quickly became quite apparent that what I was taking pictures of was…………….a rock. A very shapely rock, but a rock never the less. Maybe it was time to re-hydrate and take some food on board.

Having refuelled a little it was time to dump off the rucksack & tackle the final 50m scramble to the top. From the summit of Beinn Airigh Charr you have fine 360 degree views. Even though it was a tad hazy on the top the views were far reaching. From the naked eye you could make out the outline of the hebridean islands of Skye, Uist, Lewis & Harris. Together with amazing aspects of Loch Maree (Scotlands 4th biggest Loch & bigger than any south of the border) and Fionn Loch. The hills in the Fisherfield & Torridon are also prominent. 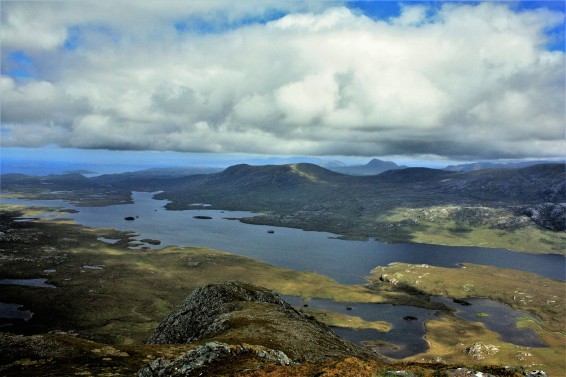 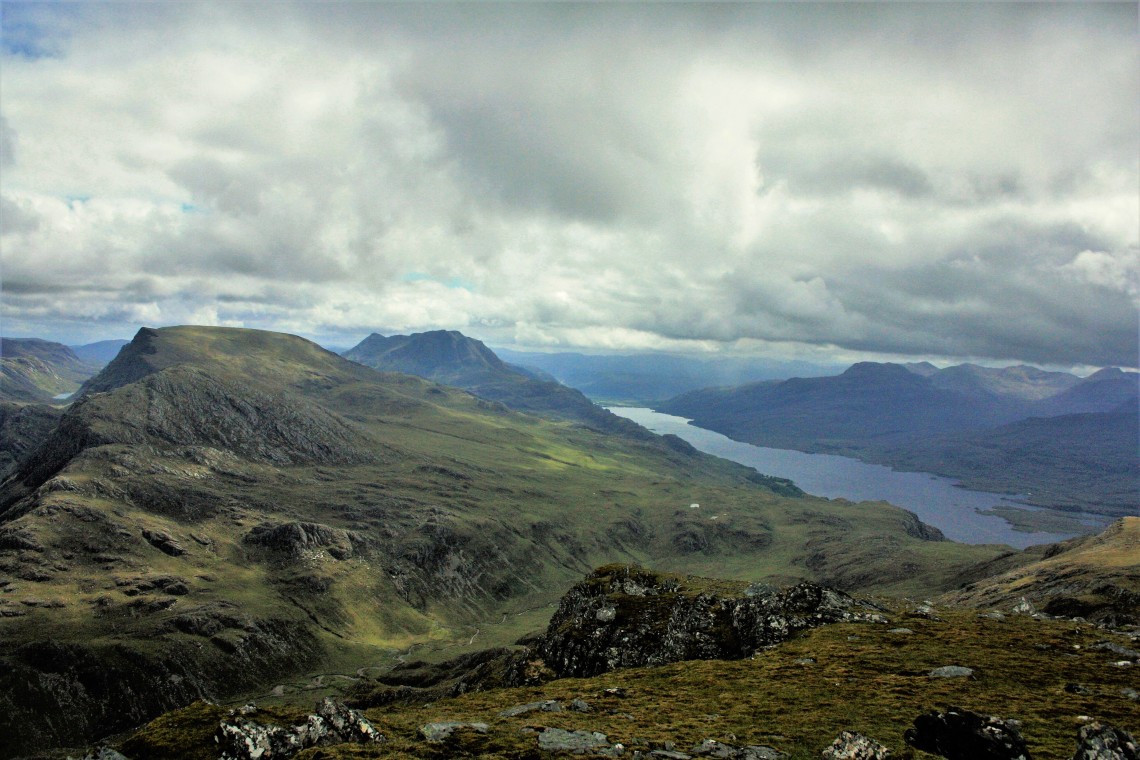 From the summit it was back down with a view of following the route in but realising that I had some more lunch to devour it was time to find a suitable spot for a snack & a sit down.  So I decided it was worth the slight detour up Meall Chnaimhean. The view down Loch Maree was breathtaking & I have to say it was difficult to drag myself away (it was even more difficult to get going again having rested for 20 mins or so).

It really was a great way to spend a few hours and hopefully it won’t be too long again until I catch up with my good friend Beinn.

We started writing this blog over a week ago now. Its taken a little longer to finish than normal because recently we very sadly lost our beloved dog Charlie. He had a royal 13 years with us and how, in his younger days, he loved leading the way to the summits before dragging us (quite literally sometimes) back down the hills. He’s really missed by us both and he would have loved the climb up Beinn Airigh Charr.